IIASA Director General and CEO Professor Dr. Pavel Kabat was invited to attend President-elect of Austria Alexander Van der Bellen’s inauguration reception on 26 January. Kabat also had the opportunity to meet with Van der Bellen at a special reception prior to the Vienna Ball of Sciences on 28 January. 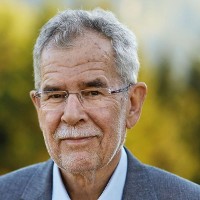 Austria is the host country of IIASA, and there is a long-standing history of collaborations between the institute and Austrian policymakers and researchers. Since 2008 alone cooperation with over 50 Austrian organizations has led to over a thousand scientific publications. Kabat has meet with Heinz Fischer (President of Austria 2004-2016) on numerous occasions, and Fischer has supported many IIASA initiatives including the Alpbach-Laxenburg Group, which was established by IIASA and the European Forum Alpbach in 2013.

Kabat had the opportunity to meet with Fischer’s successor, President-elect Van der Bellen, on two occasions: Kabat joined the inauguration reception on Thursday 26 January as an invited guest. Both Kabat and Van der Bellen also confirmed their attendance at a special reception prior to the Vienna Ball of Sciences on Saturday 28 January.

Austrian leaders emphasize the unique role the country plays as an East-West hub and as a moderator between industrialized and developing countries. Neutrality and multilateral problem solving are cornerstones of Austria’s long-term foreign policy and have seen Vienna become one of the most important headquarters of international organizations in the world. IIASA contributes to this policy through building international consortiums of researchers to find global solutions to global problems. From the Institute’s headquarters just outside Vienna, these multinational teams gather to research today’s major global challenges ranging from tackling climate change to building sustainable energy systems to solving water scarcity.