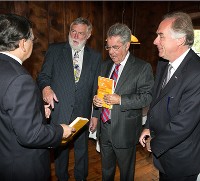 The European Forum Alpbach 2013 culminated on 31 August, with plenary sessions co-organized by IIASA and with a number of high level speakers. During the last session, European Forum Alpbach and IIASA announced the launch of a new global think tank. Both EU Commission President José Manuel Barroso and Austrian Federal President Heinz Fischer added their support for this new initiative and Barroso emphasized the need for an integrated systematic approach to fair globalization.

IIASA and European Forum Alpbach signed a strategic partnership in May 2013 and the global think tank is one of the first initiatives to come out of this alliance. The European Forum Alpbach and IIASA are both uniquely poised at the nexus of international and interdisciplinary research to seek solutions to major global challenges – such as energy, food and water, poverty and equity, and their related issues on the economic and political governance. At the closing sessions of the European Forum Alpbach both Barroso and Fischer stated that such questions can only be addressed through international and interdisciplinary exchange.

The new global think tank will unite IIASA’s systems approaches, and its scientific excellence with the Forum’s unique and historically proven power to convene meetings with leading political, economic and industrial players, thus providing a unique platform for interdisciplinary dialogue. 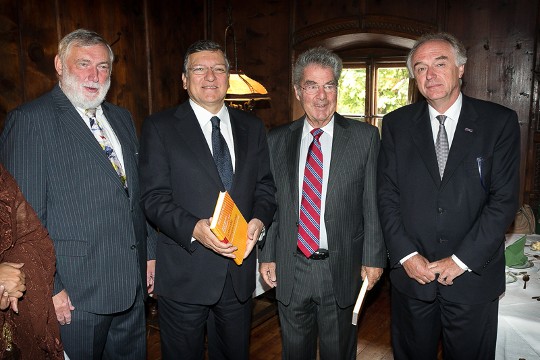 Speakers at the closing plenary sessions included the US economist and advisor to UN Secretary General Jeffrey Sachs, the Chairman of UN Energy, Kandeh K. Yumkella, the Chairman of the UN Intergovernmental Panel on Climate Change, Rajendra Kumar Pachauri, and the founder of the Internet platform WAMDA, Habib Haddad, as well as the Director and CEO of IIASA, Pavel Kabat. They discussed the potential contribution of entrepreneurs as central players in a globalized economy towards fairer distribution. This was followed by an concert by IIASA’s goodwill ambassadors, the Vienna Philharmonic, and then the UN Under-Secretary-General  Valerie Amos, Federal President  of Austria Heinz Fischer, EU Commission President José Manuel Barroso and the Tanzanian President Jakaya Mrisho Kikwete discussed “New Ideas for a Fair Globalization: The Role of Politics.”

Blog post by Pavel Kabat: Inside the Alpbach Forum