New Mexico visualized: Dr. Roger Levien, the second Director of IIASA and founder of the Young Scientists Summer Program (YSSP) has been observing the state of New Mexico for over twenty years. 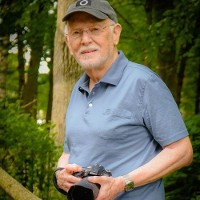 Science meets art: Roger Levien (IIASA Director 1974-1981) will showcase his photos in this IIASA Gallery event on 21 June at 5pm in the Kaisergang.

Levien's artworks record his observations of some of New Mexico's most complex and dynamic subsystems, scoping from dashing hummingbirds to majestic mountain ranges. Levien has been a photographer since 1947 and a systems analyst since 1957. He is currently President of the U.S. Friends of IIASA, a member of the U.S. National Member Organization Board, and Vice Chairman of the IIASA Fund.

The event coincides with the YSSP 40th Anniversary celebrations on 20-21 June. The YSSP, which was created by Levien back in the summer of 1977, helped launch the careers of many young scientists.

To attend this IIASA Gallery exhibition, please register until 15 June by sending an email to Phillip Widhalm ().

The Young Scientists Summer Program will celebrate its 40th anniversary this year on 20-21 June.

IIASA Gallery in the Kaisergang