A high-level delegation led by HE Professor Dr Sorena Sattari, Vice President of the Islamic Republic of Iran for Science and Technology, visited IIASA on 23 July to discuss future collaboration. 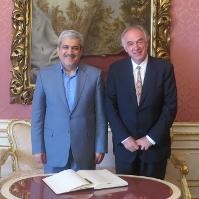 Discussions focused on developing closer collaboration between Iran and IIASA, and on Iran joining the Institute. Kabat presented an overview of IIASA and its recent collaborations with Iran and was accompanied by IIASA Program Directors who outlined future activities between IIASA and Iranian researchers.

Recent IIASA research from the Risk, Policy and Vulnerability program is examining the social acceptance of renewable energy use in Iran, which remains a minor share of the current energy supply in the country, compared to fossil fuels and nuclear energy. Public support or opposition as well as willingness to use renewable energies (RE) are important drivers for deployment of solar and wind energy generation technologies. Therefore, researchers are exploring different cognitive and behavioural factors influencing support, opposition or willingness to use RE. In several recent publications, IIASA researchers Masoud Yazdanpanah and Nadejda Komendantova study these human factors, which are essential for energy transition in Iran. Their work is based on several surveys, studies of perceptions and views of different stakeholders in Iran.