Population growth and changes in demographic structure are a key factor influencing future climate change, as well as people’s ability to adapt. 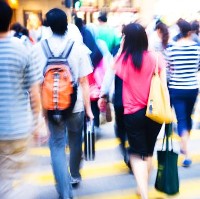 The research relies on new IIASA population projections, which include not just the numbers of people, but also the composition of populations by age, sex, and educational attainment for a number of different scenarios designed for climate research, the Shared Socioeconomic Pathways (SSPs).

“These new population scenarios that are embedded in the context of the SSPs provide a much broader account of the relevant social changes that matter for climate change mitigation and adaptation.  They allow researchers from different fields to study the complex dynamics between population and climate change in a more comprehensive and policy relevant way,” says Lutz.

Population growth leads to greater emissions of greenhouse gases that contribute to climate change. But a growing body of research shows that people’s education level, age, and other sociodemographic factors play a large role in their lifestyle. These factors influence not only emissions, but also people’s ability to adapt to climate change.

“Population growth is undoubtedly one of the main drivers of greenhouse gas emissions and thus climate change. What’s far less acknowledged is the importance of differential climate impact depending on demographic characteristics,” says Striessnig.

For example, in a recent study the researchers showed that education makes people less vulnerable to the types of natural disasters—floods, landslides, and storms—that are expected to intensify with climate change.

Until now, climate models have included only very rough estimates of future population changes. With the new SSPs, developed with a large contribution from IIASA research programs, the scenarios can now take into account multiple population characteristics.

The links between population characteristics and climate change are not simple one-to-one relationships, the research shows. For example, while increasing education is linked to increased affluence, and therefore greater consumption and emissions, research also shows that at a given level of income better educated people make more environmentally friendly consumption choices. IIASA researchers are also exploring these links.

Read an interview with Striessnig on the IIASA blog.