Recent declines in greenhouse gas emissions in the US were spurred more by the economic recession than by a shift from coal to natural gas, according to new IIASA research. 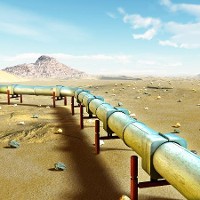 From 2007 to 2013, US carbon dioxide emissions from fossil fuels decreased by about 11%. This decline was widely attributed to a shift from coal to natural gas in US electricity production. However, a new analysis published in the journal Nature Communications shows that, in fact, the recent economic recession accounts for the majority of the decline.

“Natural gas emits half as much CO2 as coal when used to make electricity,” explains IIASA researcher and University of Maryland professor Laixiang Sun, who conducted the study with colleagues at the University of Maryland. However, he says, “This calculation fails to take into account the release of methane from natural-gas wells and pipelines, which also contributes to climate change.”

In the United States, coal-powered electricity went from 50% to 37% of the generation mix between 2007 and 2012, with the bulk of it replaced by natural gas, in large part due to new hydraulic fracturing, or fracking, and underground mapping technologies. Because this shift occurred at the same time as the reduction in emissions, many commentators linked the two.

Yet in addition to the economy, other factors such as population growth and energy efficiency also affect total emissions. Before the new study, nobody had analyzed the various causes of the decline in a quantitative, systematic way.

“If we don’t understand the factors that led to this emissions reduction, we won’t know how to effectively reduce emissions in the future,” says University of Maryland professor Klaus Hubacek, who is also an alumnus of IIASA’s Young Scientists Summer Program.

To tease out the causes of the decline in emissions researchers used a method known as Structural Decomposition Analysis to tease apart the various contributions of six different factors related to energy use and CO2 emissions. Using this method, they were able to determine the relative influence of changes in population, amount and patterns of consumption, production structure, and changes in fuel mix on total emissions of greenhouse gases. 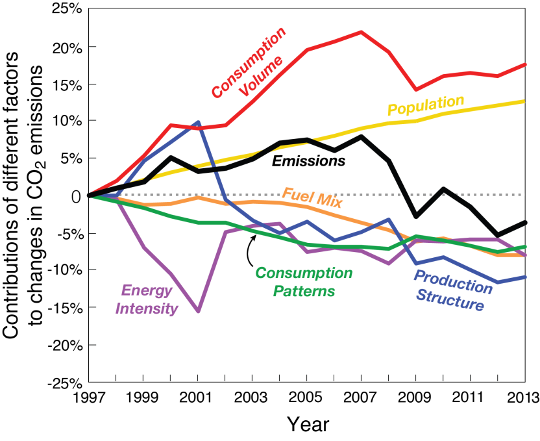 The new study explores relative contributions to greenhouse gas emissions in the US over the past decade. Credit: Feng et al 2015. Nature Communications

The study found that from 1997 to 2007, a period of rising emissions, 71% of the increase was due to increase in US consumption of goods and services, with the remainder due to population growth. From 2007 to 2009, when emissions declined the most, the study finds that 83% of the decrease was due to economic factors including consumption and production changes, and just 17% of the decline related to changes in the fuel mix. After 2009, emissions declined by only about 1%, and this was due to a mix of all three factors.

Knowing the relative influence of such factors on emissions is important for making effective plans and policies for future climate mitigation, the researchers say. In particular, the researchers say, the study may indicate that further increase in use of natural gas may not have major benefits for the climate. While natural gas can substitute for coal, research also shows that cheap and abundant natural gas can limit the growth of carbon neutral energy sources including solar, wind, and nuclear.

Sun explains, “Sustaining economic growth while also drastically reducing emissions to the levels targeted by the Obama Administration will depend upon large additional decreases in the energy intensity of the U.S. economy, as well as radical decarbonization of the energy sector.”