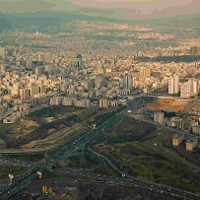 Aerial view of Tehran in a rainy day with ray of sunlight shining through clouds on the city. Photo taken on: March 13th, 2014 . © Borna Mirahmadian | Dreamstime

IIASA’s Energy Program Director, Professor Keywan Riahi, was a member of the President of Austria’s delegation which arrived in Iran on 7 September. The visit, the first by the head of a European state in a decade, aims to develop closer relations between Austria and Iran in economic, scientific, and cultural fields. The high-ranking delegation also included Vice-Chancellor Reinhold Mitterlehner, Minister of Foreign Affairs Sebastian Kurz, and a large number of representatives of Austrian industry and business.

During the visit, Riahi will participate in a roundtable discussion hosted by the Austrian Vice-Chancellor and the Iranian Minister of Science, Research and Technology Mohammad Farhadi. In addition, Riahi will discuss closer collaboration between IIASA and Iranian researchers in the area of energy through meetings with key representatives at the Iranian Ministry of Energy and Sharif Energy Research Institute, Sharif University.

Closer Collaboration between IIASA and Iran

IIASA global research and science-to-policy strategy is based on a concept of understanding economic, social, and environmental transitions in the key regions and countries of the world, one of them undoubtedly being the Middle East. With this in mind and following the positive developments of the international negotiations with Iran, IIASA has been exploring closer collaboration with Iran. This includes:

IIASA Research Activities with Iran: Past and Present

Researchers from IIASA and Iran have collaborated on a range of activities, including:

IIASA AND PRESIDENT OF AUSTRIA

At the European Forum Alpbach 2015

At the margins of the UN General Assembly

At the IIASA 40th Anniversary Conference