On Sunday at the plenary session of the United Nations General Assembly, the Federal President of Austria, Heinz Fischer announced Austria’s nomination of IIASA Deputy Director General Nebojsa Nakicenovic as the next chair of the Intergovernmental Panel on Climate Change (IPCC) and called on other countries to support this nomination. 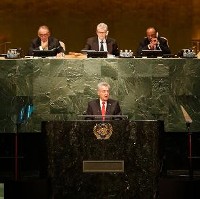 Speaking about the importance of our collective effort towards tackling climate change at the Seventieth Session of the United Nations General Assembly in New York on 27 September 2015, President Fischer said: “I would like to mention the invaluable contribution of the IPCC, the Intergovernmental Panel on Climate Change, to providing scientific data and analysis. In October it will elect a new bureau. I am pleased to announce that Austria has nominated Professor Nakicenovic, the internationally renowned and respected scientist as chair of the IPCC, and hope that you will be able to support this excellent candidate.”

At the UN General Assembly in New York this Sunday,  IIASA Director General and CEO Professor Dr. Pavel Kabat personally thanked President Fischer for his support and for the support of Austrian  Government as the host country to IIASA.  “IIASA is proud that both the Austrian and Montenegrin governments have nominated Professor Nakicenovic as the next chair of the IPCC,” Kabat recently said. “The Institute strongly supports Nakicenovic’s candidature and, if elected, will make, in collaboration with Austrian Government, all possible efforts to provide scientific and institutional support for his IPCC role.” The Institute's international focus, its independence, its expertise in systems analysis and significant contributions to the IPCC (see below) along with over forty years experience in producing policy-relevant science make it an ideal institute to host the next chair of the IPCC.

The next chair of the IPCC
Next week, the IPCC will elect a new chair during its 42nd Session in Dubrovnik, Croatia, from 5th to 8th of October 2015. The IPCC plays a critical role in providing the best scientific knowledge on climate change through a unique process that includes 195 governments, which is reflected in the nomination of six excellent candidates, three from countries with membership in IIASA (USA, Korea, and Austria ) 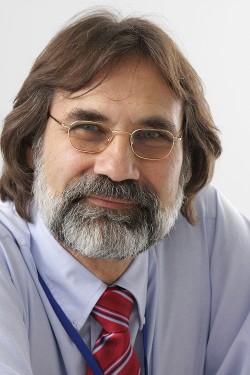 The Institute is privileged that both the governments of Austria and Montenegro have nominated its Deputy Director General. Nakicenovic is one of the world's most renowned scientists in the field of climate change and has demonstrated strong leadership in a wide range of international scientific assessments.

Nakicenovic’s plans for strengthening the IPCC include focusing on integrating climate change research to better understand the potential synergies and trade-offs for climate change measures with respect to food, water, energy, air quality, urbanization, and biodiversity and ecosystem services. At the same time he argues for integration with the Sustainable Development Goals, adopted last week and other processes such as the INDCs and the upcoming climate negotiations in Paris.

With respect to the IPCC itself, Nakicenovic champions stronger involvement of researchers from developing countries in the reports, stronger links between the working groups, and a renewed focus on policy relevance including closer links to governments.

“Most important is that the IPCC needs to be based on the best science, not be prescriptive but respond to the best knowledge and uncertainties in all of the three areas of climate change, the physical science, the impacts and vulnerabilities, as well as adaptation and mitigation,” Nakicenovic recently said.

In the 1970s, IIASA systems analysts were some of the first to study climate change in an interdisciplinary way, with one of the first international and interdisciplinary assessments of what was then called the carbon dioxide problem.   During this time, IIASA researchers also developed the first economic model of global warming and identified carbon capture and storage as a possible solution.

Move forward to 1985 and IIASA systems scientists are again playing a key role. This time at an international conference in Villach, Austria, where they warned the world about the risks of climate change. The Villach conference, according to the New Scientist, was key to recasting climate change as a problem for today and leading to the establishment of the IPCC in 1988.

Since the founding of the IPCC, IIASA researchers have made numerous substantial contributions to the intergovernmental panel. These include Nebojsa Nakicenovic’s leadership of a major report on greenhouse gas emission scenarios for the IPCC in 2000, which involved the development of emissions scenarios that are still widely used to project how emissions will affect future climate. Nakicenovic directed the Global Energy Assessment (2012), which was the first ever fully  integrated  assessment  analyzing  energy challenges,  opportunities  and  strategies  for  developing,  industrialized and emerging economies and provided the scientific basis for the United Nations Sustainable Energy for All (SE4ALL) initiative. IIASA researchers have made 90 contributions to the IPCC’s five assessment reports as authors and reviewers. And most recently, they have co-developed and hosted several key databases, which among other things are helping to coordinate the work for the climate research community.

In addition, IIASA researchers have applied the IPCC approach to a national level assessment of climate change. Most notably, by Nebojsa Nakicenovic, as Project Leader of the Austrian Panel on Climate Change Assessment Report (APCC-ARR14) which  represents the  first  comprehensive  analysis  of  climate  change  in  Austria,  including  climate impacts, vulnerability, and mitigation options.

Energy in a Finite World

42nd session of the IPCC