A new study by an international team of researchers including IIASA scientists has found what amount of emissions reductions it would take for a major economy to lead out of the climate gridlock. 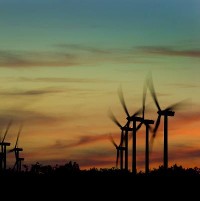 Though most countries around the globe agree that warming must be limited to below 2°C to avoid a raft of climate risks, they clash about who should do what to reach this target. Hence the issue of allocating greenhouse gas emissions reductions will be key for the outcome of the world climate summit COP21 in Paris. A new study, published in the journal Nature Climate Change finds that effectively limiting climate change is possible if a major economy acts as a forerunner, while other nations follow – and, importantly, by doing so they do not have to agree on common criteria for fairness.

“If either the European Union or the US would pioneer and set a benchmark for climate action by others, the negotiation logjam about fair burden sharing could be broken,“ lead author Malte Meinshausen from the Potsdam Institute for Climate Impact Research and the University of Melbourne says. “Our analysis shows that they would have to roughly double their current domestic 2030 emissions reductions targets – which would certainly require substantial efforts. Yet it seems to be one of the few options to stay on track for eventually limiting warming below 2°C and fend off a drastic increase of weather extremes and sea-level rise.“

Two conflicting fairness criteria
While the UN Climate Change Convention holds up the formula of “common but differentiated responsibility,” the world is currently divided into two main camps. One is in favor of distributive justice at some point in the future: emissions per person would be roughly same in every country by 2050. This includes the EU and the USA. The other camp, with China and India, calls for corrective justice: the emissions of the past should be taken into account to achieve equal cumulative emissions per person. This kind of fairness scheme would mean that those that emitted less in the past can emit more in the future on a per-capita basis.

Analyses of emissions reduction pledges and past negotiations show that, unsurprisingly, countries tend to adhere to the allocation principle which allows them to least reduce emissions, compared to their international competitors. Since China and India industrialized only recently, in the past they emitted less than the EU and the US did. Yet today China emits more than the EU and US combined on an absolute basis, and about the same as the EU on a per-capita basis.

“This seems less utopian than a uniform regulation”
“Now we have calculated how much a major economy would have to cut its greenhouse gas output if all the other countries would follow the emissions allocation scheme that is most favorable to them – so some base their reduction number on the equal per capita scheme, others include the historical emissions, and still the 2-degree limit is met,” says co-author Louise Jeffery from the Potsdam Institute. The scientists call this concept diversity-aware leadership. “This seems less utopian than a uniform regulation,” says Jeffery. “But it builds on the assumption that most economically relevant countries participate in one way or another and ensures that the global efforts are successful in limiting warming to 2°C.” 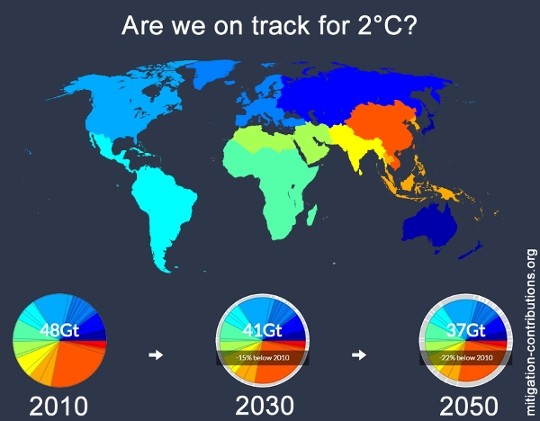 An interactive website provides maps, figures, and results for all G20 countries.

It’s in the numbers: China will not take the lead
China could also take the lead, but beyond political considerations already the numbers show that this is unlikely. In fact, the quantification of the Chinese pledge indicates the largest gap between a leadership target and a currently proposed peaking by 2030. If China wanted to assume leadership, China would have to reduce emissions by 32 percent below 2010 levels by 2030. In a scenario of equalized cumulative per-capita emissions, it would only need to reduce them by 4%. This seems little, but would in fact be a most crucial contribution.

“If you look at what pledges the countries put on the table for Paris so far, it’s clearly not enough to keep warming within the internationally agreed 2-degree limit – hence the current ‘intended nationally determined contributions’ can only be regarded as a first step in the right direction,” says co-author Sebastian Oberthuer from Vrije Universiteit Brussel.  Based on IPCC databases, the scientists derived their proposition which is contrary to previous assumptions about allocation schemes. “If we postpone action until we have universal agreement on a fair allocation of emissions reductions,” he says, “the result will be fair only in that everybody will lose – because climate change will hit us all.”

“Our study thus anticipates the upcoming Paris climate summit, which will see countries make their mitigation contributions in an independent bottom-up manner,” says IIASA researcher Joeri Rogelj, who also worked on the study. “This is a fundamental break with the past,” he says, “and in this new landscape, our study introduces an important new concept which helps us understand how major countries can still assume a leadership role on this highly fragmented playing field.

An interactive website with results for all G20 countries is available at www.mitigation-contributions.org