Oil prices can have a major impact on the types and quantities of energy sources used—and thus on greenhouse gas emissions. A new study from researchers at IIASA and the World Bank is the first to quantify the energy and emissions impacts of future fuel prices and the various unknowns these impacts depend on. 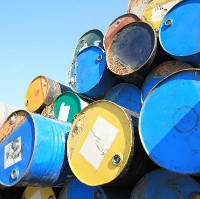 Sustained high (US$110–120 per barrel) or low (US$40–55 per barrel) oil prices could have an important impact on future carbon dioxide emissions, according to a new study published in the journal Nature Energy. The magnitude of the impact is found to depend not just on oil prices, but also on other uncertainties connected to energy supply and demand technologies, alternative resources and climate policy. Based on the authors’ calculations, the emissions differences resulting from vastly diverging oil price paths could be on the order of 5 to 20% of the total budget for staying below the internationally agreed 2°C target.

They also find that a continuation of currently low oil prices could harm the climate as much as countries’ Nationally Determined Contributions (NDCs) are expected to help it. If oil prices were to remain low for decades, the analysis shows that energy efficiency and decarbonization efforts could be considerably hampered. The resulting emissions increases from this could be of the same magnitude as the reductions expected, in aggregate, from countries’ NDCs, which were agreed to at the Paris climate conference last year. On the other hand, while sustained high oil prices could provide climate change mitigation efforts a mild boost, the study concludes that such market developments would be no substitute for concerted global policy to limit climate change to below 2°C above preindustrial levels.

The new study relies on the IIASA energy system model MESSAGE in order to explore a variety of long-term scenarios for the development of oil prices up to 2050. “Oil prices have a history of rising and falling.  They are currently pretty low, but the question is where they go from here. Our aim was to explore the longer-term impacts of completely different oil price futures, in terms of the future energy mix and carbon emissions,” says IIASA energy researcher David McCollum, who led the study. “What we find is that sustained low or high oil prices could have a major impact on the global energy system over the next several decades; and depending on how the fuel substitution dynamics play out, the carbon dioxide consequences could be significant.”

A key insight of the study is that the future fuel mix will depend in large part on whether oil and natural gas prices decouple at globally over the next several decades. IIASA Energy Deputy Program Director Volker Krey, who also worked on the study, says, “It was surprising to see how much the future energy picture depends on the link between oil and gas prices. Crude oil and natural gas prices have historically risen and fallen in concert. But this situation has changed in the US, thanks in part to the boom in shale gas production. If such developments were to occur elsewhere, either because of shale gas or the advent of a truly global natural gas market, then, according to our analysis, this could have a major impact on the use of different fuels – oil, gas, coal, renewables, and nuclear.”

Other critical uncertainties identified by the authors include the potential for sustainable biofuels to replace oil and the growth of the electric vehicle market.

Because oil and gas are so intertwined with the rest of the energy system and global economy, measuring the net impacts of different price futures presents a challenge. IIASA Energy Program Director Keywan Riahi explains, “Low oil and gas prices make it harder for coal and renewables to compete. From a climate perspective, a reduction in coal is a good thing, whereas a reduction in renewables is not so good. Basically, the parallel movement of these high- and low-carbon substitutes to oil and gas partially cancels out the emissions benefits and consequences of one or the other.”

The study gives rise to additional questions and uncertainties, for example what effects sustained low prices could have on long-lived energy infrastructure.