Who are the refugees who fled to Austria in the fall of 2015? In a new study, researchers have assessed the skills, attitudes, and values of asylum seekers and refugees who arrived in Austria last summer and fall. 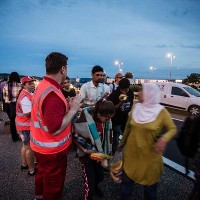 Asylum seekers who entered Austria in summer and fall 2015—especially those from Syria and Iraq—are well educated, have rather liberal values, and come from a predominantly middle-class background, according to a new study published in the internationally renowned journal PLOS ONE.

In order to assess the integration potential of refugees in Austria, it is important to learn more about their education, their professional qualifications, and their current attitudes and hopes for the future. The new study conducted by scientists from the Wittgenstein Centre for Demography and Global Human Capital, a research cooperation between the Vienna University of Economics and Business (WU), the Austrian Academy of Sciences (ÖAW) and the International Institute for Applied Systems Analysis (IIASA), investigated these features for the first time in a German-speaking country. Around 500 people in Austrian refugee accommodations were interviewed for the study.

"Our study shows that respondents from Syria and Iraq in particular, compared with the population in their home countries, are well educated, hold few traditional values, and mainly come from middle-class families,” say Isabella Buber-Ennser and Judith Kohlenberger, researchers at the Austrian Academy of Sciences and the Vienna University of Economics and Business.

Almost half of the respondents from Syria and Iraq had completed secondary education, and more than a quarter had at least obtained a post-secondary degree, such as a high-school diploma or a higher education degree. This corresponds to roughly the same percentage of people with post-secondary education in Austria, according to the research team. "The widely held views that asylum seekers and refugees are uneducated or even illiterate could not be confirmed by our survey," says Buber-Ennser.

​​According to the research team, the high level of education is reflected in the values and attitudes of the respondents, who overall view themselves as not particularly traditionally oriented. Asylum seekers and refugees in Austria consistently identified themselves as more liberal than the population in their home countries, compared to current data from the "World Values Survey,” which investigates attitudes on issues such as religion and gender relations in Arab countries. Nearly a quarter of the respondents declared themselves not to be religious at all, and a significant majority of the surveyed men and women agreed with the statement that "having a job is the best way for a woman to be an independent person.”

"The individuals included in our survey, who came to Austria in late 2015, are mostly middle class," adds Kohlenberger. This is demonstrated by socioeconomic indicators, which were also examined in the study. For instance, four fifths of respondents lived in their own or their family’s house before they had to flee. The majority also indicated that they had to pay more than US$ 2,000 for their journey: many times more than the average annual income in the respective countries of origin. Similarly, the fact that the vast majority of respondents considers themselves to be healthy and fit for work suggests that the surveyed asylum seekers are from well-off backgrounds, say the authors.

With the results of their study, the researchers hope to contribute scientific facts to the public debate about the integration of asylum seekers and refugees. According to IIASA World Population Program Director Wolfgang Lutz, who is also the founding director of the Wittgenstein Centre, the study implies that "the potential for integration of refugees who came to Austria last year is remarkable: high education rates, rather liberal attitudes, and a firm affiliation with the middle classes of their respective countries of origin are good conditions for fostering successful integration into our society."

About the study
For the present study, a team of ten researchers surveyed 514 asylum seekers and refugees from both sexes and different ages, mainly from Syria, Iraq, and Afghanistan, in November and December 2015, allowing conclusions about around 1400 people. Face-to-face interviews were conducted in seven refugee accommodations in and around Vienna to question respondents about their origins, education and professional experience, marital status, attitudes, and values as well as their future plans. Among the co-authors was the Syrian demographer Zakarya Al Zalak (IIASA), until recently the director of the Statistical Technical Institute in Damascus.

Joint Press release with the Wittgenstein Centre for Demography and Global Human Capital, Vienna University of Economics and Business (WU), the Austrian Academy of Sciences (ÖAW)