Trade-offs between economic growth and deforestation

In many developing countries, economic growth and deforestation seem to go hand in hand—but the links are not well understood. In a new study, researchers use an innovative methodology to quantify the relationship. 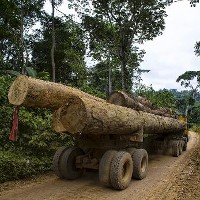 Economic growth in poor countries increases along with deforestation rates, but the effect disappears in wealthier economies, according to a new study published in the journal Scientific Reports, which is published by Nature.

Although economic development has long been assumed to be a driver of deforestation, there has been little reliable data to support the theoretical link. In the new study, researchers combined satellite data on forest cover with economic data from 130 different countries. By comparing forest cover across border regions with similar geography, they were able to make comparisons between economic factors and deforestation in different countries.

“This study was like a large-scale, natural experiment, which in economics is extremely rare.” says IIASA researcher Jesus Crespo Cuaresma, who led the study.  “For the first time, we were able to empirically assess this effect in a convincing fashion, making use of natural borders.”

This graph shows the estimated relationship between per capita income and forest cover by country. Click to enlarge. ©Crespo Cuaresma, 2017

In economics, the hypothetical link between economic development and environmental degradation is known as an environmental “Kuznet’s curve," Crespo Cuaresma explains, “Theory predicts that economic growth in poor countries increases environmental depletion, but that the effect disappears or reverts for developed economies.”

In the new study, the researchers found what they described as “half of a Kuznet’s curve”—that is, the data agreed with the hypothesized link between economic development and deforestation for developing countries. For wealthier countries, however, the correlation disappeared.

The study has implications in particular for countries on the “dangerous” part of the deforestation curve, where economic growth is likely to lead to major forest cover loss in the near future. The results suggest that Africa is expected to be particularly vulnerable to forest cover loss as sub-Saharan economies catch up on income per capita with the rest of the world.

“This is particularly worrying because Africa is home to some of the world’s largest tracts of remaining undisturbed forests,” says IIASA researcher Ian McCallum, who also worked on the study. “Factors that keep deforestation in check in other tropical regions of the world, like good governance, monitoring systems, and peace, are lacking in much of tropical Africa.”

IIASA scientists have been contributing to a growing body of research related to sustainable development in tropical forest basins. IIASA researcher Ping Yowargana, who works on the IIASA Tropical Futures Initiative adds, “It’s important to keep in mind that there are many factors that contribute to deforestation. Issues like education, ease of doing business, and corruption are vital to understand the bigger picture—and to find solutions that can lead to both decreased poverty along with forest preservation.”

Explore forest cover maps and data on the Geo-Wiki portal.