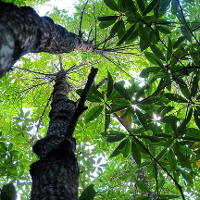 A new collaborative IIASA initiative brings together scientists from several disciplines and institutions and high-level policymakers to address tropical deforestation by developing sustainable land use options.

The Tropical Futures Initiative (TFI) is a multiyear project developed and coordinated by IIASA. Core partners in the project consortium are the Reducing emissions from deforestation and forest degradation (REDD+) Agency for Indonesia, the Indonesian Delivery Unit to the president (UKP4), the Brazilian Institute for Applied Economic Research (IPEA), and the Brazilian Institute for Space Research (INPE). Future integration of additional institutions such as the World Agroforestry Centre (ICRAF) and the World Wildlife Fund (WWF), as well as the step-wise extension of the initiative towards further (NMO) countries and ongoing research activities in the tropical basins, will allow the initiative to make best use of strong institutional capacities at all levels.

The TFI will begin with a focus on tropical deforestation, but is planned to expand into interconnected issues such as greenhouse gas emissions, air pollution, agriculture, and water. The first step is to carry out a consistent quantitative global, regional, and national REDD+ assessment for Indonesia. As part of this assessment, researchers will assess policy options, mitigation potential, investment costs in forestry and agriculture, linkages to carbon markets, and synergies, as well as trade‑offs with other environmental policies and the bio-economy in general. IIASA models such as the global economic land use model (GLOBIOM, previous.iiasa.ac.at/globiom) and the global biophysical forestry model (G4M, previous.iiasa.ac.at/g4m) will be used to support high-resolution policy planning for avoiding deforestation, as well as promoting REDD+ and biodiversity protection.

The next step in this process will be a close link between the TFI and IIASA’s REDD+ Policy Assessment Centre (REDD-PAC), a project launched in 2011 that is funded by the German International Climate Initiative (IKI). This will help to solidify gains already made, add more technical know-how, and provide a global forum for sharing and improving data.

The TFI also includes a major capacity building component. To that end, researchers from the target and consortium countries are invited to the “TFI Research School,” where they will have the opportunity to improve their capacity in economic land use modeling and can exchange data as well as experiences in working with spatially explicit planning tools.