Low-carbon energy is gaining momentum worldwide and is globally reducing carbon dioxide pollution, but unless new technologies are deployed, this momentum could be threatened. 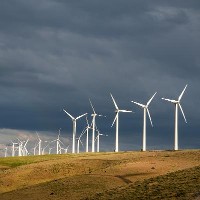 Low-carbon energy is gaining momentum worldwide and is globally reducing carbon dioxide pollution shows a study published today by researchers at IIASA, the Center for International Climate and Environmental Research – Oslo (CICERO) , the University of East Anglia (UEA), and the Global Carbon Project.

Low-carbon energy from wind, solar, biomass, and hydropower is increasing while energy efficiency is improving globally and the fossil fuel share in energy is declining, reversing the trends in global energy inefficiency of the early 2000s. But the study also shows this new low carbon momentum is threatened unless the deployment of new energy technologies is enhanced.

IIASA researcher Sabine Fuss and IIASA Deputy Director General Nebojsa Nakicenovic contributed to the study, which was published today in the journal Nature Climate Change. It examines a set of key performance indicators for tracking carbon emissions and energy sources, and for measuring progress towards addressing climate change. It shows that many key indicators are currently broadly consistent with scenarios of future energy that also address climate change.

But it also shows the need to accelerate deployment of low-carbon and renewable energy.

One key indicator, the use of technology to capture carbon dioxide pollution at power stations and store it under ground, has failed to progress. Thousands of facilities are needed at power stations, but only tens are currently proposed.

Annual global carbon emissions have almost not increased for the past three years, a result that is unprecedented while there has been global economic growth in GDP. This was mainly caused by a rapid deceleration and decline in coal use, primarily in China but also in the United States, and was due to market forces. Explosive growth in wind and solar energy contributed to the recent deceleration in global emissions.

“The rapid deployment of wind and solar is starting to have an effect globally, and in key players such as China, the US, and the EU”, said Glen Peters, Senior Researcher at the Center for International Climate and Environmental Research in Oslo (CICERO), who led the study. “The rapid and continued deployment of wind and solar is welcome, but the real challenge now is to develop technologies and behaviors that shift the entire global energy system to be carbon neutral by mid-century.”