Small and medium farms produce more than half of the food globally, and produce the vast majority of food and nutrients in low income countries, according to a new study that maps global nutrient production from farms worldwide. 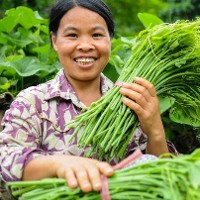 IIASA researchers Steffen Fritz, Petr Havlik, and Linda See contributed to the study, which was led by Mario Herrero at the Commonwealth Scientific and Industrial Research Organisation (CSIRO), Australia. “We contributed a vital input dataset to this study: the world’s first global field size map, which was developed as part of our ongoing crowdsourcing activities with Geo-Wiki,” says Fritz, who heads the IIASA Earth Observations Systems group.

As the world moves towards large scale agriculture to meet the growing demands for food, the findings published in the first issue of The Lancet Planetary Health highlight the need for crop and livestock diversity, and investment in small and medium farm owners in low and middle income countries to sustain the quality and quantity of global food supplies.

Estimates suggest that by 2050, there will need to be a 70% increase in food availability to meet the demands of a growing population. But, the increase in volume alone will not guarantee human wellbeing. Food systems will need to produce food of high nutritional value and crops, livestock and fish must be diverse to ensure food security.

In this study, researchers estimate the relative contribution of small and large farms to the quantity and quality of food produced at a global scale. For the first time, they map how much calcium, folate, iron, protein, vitamin A, vitamin B12 and zinc is produced in farms of different sizes from 41 crops, 7 livestock products and 14 fish groups.

Globally, more than half (51-77%) of the volume of major food groups (including cereals, livestock, fruits, pulses, roots and tubers and vegetable) are produced by small and medium farms, but there are regional differences. For instance, large farms (over 50 hectares) dominate food production in North and South America, Australia and New Zealand and produce 75-100% of all cereal, livestock and fruit in those regions. Small farms (under 20 ha) produce 75% of most food commodities in sub-Saharan Africa, South Asia, Southeast Asia and China.

Areas with small and medium farms had greater agricultural diversity than areas with large farms. However, independently of farm size, areas with more diversity of production, also produce more nutrients.

“Small and medium farms produce more than half of the food globally, and are particularly important in low income countries, where they produce the vast majority of food and nutrients. Large farms, in contrast, are less diverse but their sheer scale ensures tradable surpluses of nutrients available to parts of the world that need them most. A sustainable food system that meets the needs of a growing population means we must focus on quality as well as quantity, and it is vital that we protect and support small and medium farms and more diverse agriculture so as to ensure sustainable and nutritional food production,” says CSIRO’s Mario Herrero, lead author.