How climate change will affect future populations will depend to a great extent on people’s capacity to adapt to changing conditions. Such characteristics can be forecast in the long term, using well-established demographic methods, say IIASA researchers. 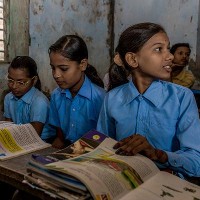 Climate research has provided a range of scenarios of showing how climate change will affect global temperatures, water resources, agriculture, and many other areas. Yet it remains unclear how all these potential changes could affect future human wellbeing. In particular, the population of the future – in its composition, distribution, and characteristics – will not be the same as the population observed today. That means that assessing likely impacts by relating the climate change projected for the future to today’s societal capabilities can be misleading. In order to understand the impacts of climate change on human beings, says IIASA World Population Program Director Wolfgang Lutz, climate change research needs to explicitly consider forecasting human populations’ capacities to adapt to a changing climate.

Lutz and IIASA researcher Raya Muttarak note that the demographic tools to do this are available and well-established. Global IIASA population and human capital scenarios up to the year 2100 already include not just numbers of people, but also their distribution by age, sex, and education level. These scenarios form the human core of the SSPs (Shared Socioeconomic Pathways) that are   widely used in research related to climate change.

In the new article, which is based on a growing body of research from IIASA and the Vienna Institute of Demography, Lutz and Muttarak discuss a conceptual model that can account for the changing characteristics of populations through the replacement of generations, called “demographic metabolism.”

“Just like cells turn over in a body, the individuals in a population are constantly replaced. The people of today differ in many ways from their parents and grandparents, and we will also be different from future generations,” says Muttarak. “We differ in education levels, in health, environmental awareness, and many other factors—and what our research has shown is that these factors directly affect our vulnerability to natural disasters or changes in our environment.”

Muttarak explains that some characteristics which people acquire early in life, like education, remain with them for their whole lives. Research by the IIASA World Population Program has shown that education in particular influences how vulnerable people are to natural disasters like floods and storms, which are expected to increase as a result of climate change. “Therefore, with more educated younger generations replacing the older ones through the demographic metabolism process, we may anticipate a society with higher adaptive capacity in the future,” says Muttarak.

Podcast: The focus on human populations in climate change research

Education as defense to natural disasters