In order to have a good chance of meeting the limits set by the Paris Agreement, it will be necessary to both reduce greenhouse gas emissions while preserving carbon sinks,  with net emissions peaking in the next ten years, according to a new study. 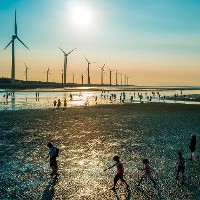 Carbon dioxide (CO2) and other greenhouse gases in the atmosphere can be reduce in  two ways—by cutting our emissions, or by removing it from the atmosphere, for example through plants, the ocean, and soil.

The historic Paris Agreement set a target of limiting future global average temperature increase to well below 2°C and pursue efforts to even further limit the average increase to 1.5°C above pre-industrial levels. Yet the timing and details of these efforts were left to individual countries.

In a new study, published in the journal Nature Communications, researchers from the International Institute for Applied Systems Analysis (IIASA) used a global model of the carbon system that accounts for carbon release and uptake through both natural and anthropogenic activities.

“The study shows that the combined energy and land-use system should deliver zero net anthropogenic emissions well before 2040 in order to assure the attainability of a 1.5°C target by 2100,” says IIASA Ecosystems Services and Management Program Director Michael Obersteiner, a study coauthor.

According to the study, fossil fuel consumption would likely need to be reduced to less than 25% of the global energy supply by 2100, compared to 95% today. At the same time, land use change, such as deforestation, must be decreased. This would lead to a 42% decrease in cumulative emissions by the end of the century compared to a business as usual scenario.

“This study gives a broad accounting of the carbon dioxide in our atmosphere, where it comes from and where it goes. We take into account not just emissions from fossil fuels, but also agriculture, land use, food production, bioenergy, and carbon uptake by natural ecosystems,” explains World Bank consultant Brian Walsh, who led the study while working as an IIASA researcher. 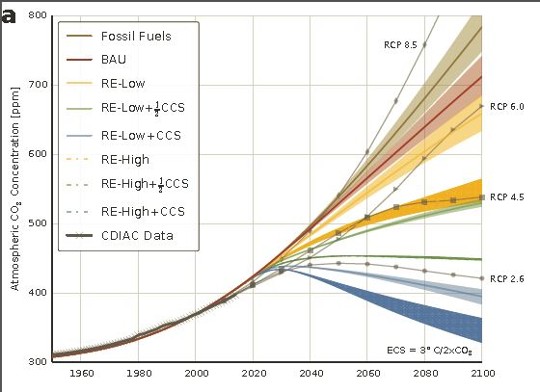 The compares four different scenarios for future energy development, with a range of mixtures of renewable and fossil energy.  In a “high-renewable” scenario where wind, solar, and bioenergy increase by around 5% a year, net emissions could peak by 2022, the study shows. Yet without substantial negative emissions technologies, that pathway would still lead to a global average temperature rise of 2.5°C, missing the Paris Agreement target.

Walsh notes that the high-renewable energy scenario is ambitious, but not impossible—global production of renewable energy grew 2.6% between 2013 and 2014, according to the IEA. In contrast, the study finds that continued reliance on fossil fuels (with growth rates of renewables between 2% and 3% per year), would cause carbon emissions to peak only at the end of the century, causing an estimated 3.5°C global temperature rise by 2100.

The study adds to a large body of IIASA research on climate mitigation policy and the chances of achieving targets.

“Earlier work on mitigation strategies by IIASA has shown the importance of demand-side measures, including efficiency, conservation, and behavioral change. Success in these areas may explain the difference between reaching 1.5C instead of 2C,” says IIASA Energy Program Director Keywan Riahi, who also contributed to the new work.

The study is one of the first published results from the newly developed FeliX model, a system dynamics model of social, economic, and environmental earth systems and their interdependencies. The model is freely available for download and use at http://www.felixmodel.com/.

“Compared to other climate and integrated assessment models, the FeliX model is less detailed, but it provides a unique systemic view of the whole carbon cycle, which is vital to our understanding of future climate change and energy,” says IIASA Ecosystem Services and Management Program Director Michael Obersteiner.