From the air, Bali’s rice terraces look like colorful mosaics, because farmers plant their fields at different times. A new study shows that the resulting fractal patterns actually lead to optimal harvests, without overarching management. 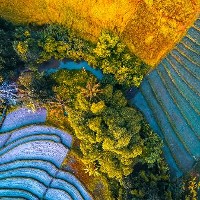 Under certain conditions, it is possible to reach sustainable situations that lead to a maximum payoff for everybody, even as each individual makes free and independent decisions, according to a new study of the Balinese rice fields published in the journal Proceedings of the National Academy of Sciences. The results could help inform sustainable resource management.

To understand how Balinese rice farmers make planting decisions, scientists in the USA and Austria used two variables for their computations: water availability and pest damage. Farmers that live upstream seemingly have an advantage in that they always have water, while those downstream have to adapt their planning on the schedules of the upstream farmers.

Here pests enter the scene. When farmers are planting at different times, pests can move from one field to another, but when farmers plant in synchrony pests drown and the pest load is reduced. That means that upstream farmers also have an incentive to share water so that synchronous planting can happen. However, there is not enough water for everybody to plant at the same time. As a result of this constraint, fractal planting patterns emerge, which yield close to maximal harvests.

"The remarkable finding is that this optimal situation arises without central planners or coordination. Farmers interact locally and make local individual free decisions, which they believe will optimize their own harvest. And yet the global system works optimally,” says the lead author Stephen Lansing, of the Santa Fe Institute. "What is exciting scientifically is that this is in contrast to the tragedy of the commons, where the global optimum is not reached because everyone is maximizing his individual profit. This is what we are experiencing typically when egoistic people are using a limited resource on the planet, everyone optimizes the individual payoff and never reach an optimum for all,” he says.

The scientists find that under these assumptions, the planting patterns become fractal, which is indeed the case as they can confirm with satellite imagery. "Fractal patterns are abundant in natural systems but are relatively rare in man-made systems,” explains Stefan Thurner. These fractal patterns make the system more resilient then it would otherwise be. “The system becomes remarkably stable, again without any planning - stability is the outcome of a remarkably simple but efficient self-organized process. And it happens extremely fast. In reality it does not even take ten years for the system to reach this state,” Thurner says. Spatial patterning often occurs in ecosystems as a self-organizing process caused by feedback between organisms and the physical environment.

"The centuries-old Balinese rice terraces are also created by feedback between farmer’s decisions and the ecology, which triggers a transition from local to global-scale control”, explains Lansing,  “Our model shows for the first time that adaptation in a coupled human-natural system can trigger self-organized criticality."