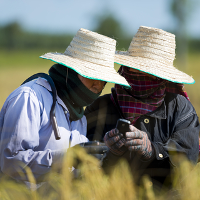 The €1.4 million grant will build upon work conducted as part of IIASA’s Geo-Wiki project, an interactive online project which involves citizen scientists in global land cover research. It will take the team’s research from the computer to the real world, building a global network of citizen scientists to provide on-the-ground data such as photographs and land-cover and land-use classifications.

“It is extremely difficult to distinguish between cropland and natural vegetation in some parts of the world based on coarse resolution satellite data, which is what most current land cover data products are based on,” says Fritz, a researcher in IIASA’s Ecosystems Services and Management Program. “So there is large disagreement between these different products on where cropland is located.” Understanding where cropland is located is important for future food production as well as for monitoring environmental changes such as deforestation.

Previous work by the Geo-Wiki team has produced improved cropland maps based on crowdsourced data from volunteers who classify land cover data from high-resolution satellite imagery. Previous research from the team shows that in fact, non-experts can be just as good as experts in performing some of these tasks, such as recognizing human impact on a landscape.

The Geo-Wiki team has also used games and social networking to build their network of citizen scientists. For example, Cropland Capture, a new game for tablet, mobile phone, and desktop computer has involved over 2,500 participants who have validated over 2.5 million square kilometers of land cover data, an area greater than half the size of the European Union.

“Crowdsourcing is just starting for environmental monitoring,” says Fritz, “There have been lots of crowdsourcing projects in astronomy, archaeology, and biology, for example, but there hasn’t been much on land use, and there is huge potential there.”

The new project will focus on two pilot areas in Austria and Kenya. In Austria the researchers will focus on collecting on-the-ground data along the lines of the Eurostat’s Land Use Change Analysis System (LUCAS) surveys, by building and engaging a local network of citizen scientists to collect the data. By using the same protocol and designing smartphone applications, the crowdsourced data collection would produce data that could be compared. The team will engage volunteers by working with existing communities such as OpenStreetMap as well as geocaching groups, local and national governments, and NGOs.

In Kenya, the team will follow a similar protocol, but the data would be even more valuable. The project should demonstrate the feasibility of crowdsourcing for data collection in developing countries.

“In the developing world we have very limited information, and the resources are not there for major surveys like in Europe,” says Steffen. In order to recruit volunteers in Kenya, the program will offer micropayments to participants who provide data. The team will also recruit volunteers with expertise in land cover, such as university students and surveyors.

IIASA and the ERC

About IIASA
IIASA is an international scientific institute that conducts research into the critical issues of global environmental, economic, technological, and social change that we face in the twenty-first century. Our findings provide valuable options to policy makers to shape the future of our changing world. IIASA is independent and funded by scientific institutions in Africa, the Americas, Asia, Oceania, and Europe. previous.iiasa.ac.at

About the ERC
Set up in 2007 by the EU, the European Research Council is the first pan-European funding organisation for frontier research. It aims to stimulate scientific excellence in Europe by encouraging competition for funding between the very best, creative researchers of any nationality and age. It funds young, early-career top researchers ('ERC Starting Grants'), already independent excellent scientists ('ERC Consolidator Grants'), and senior research leaders ('ERC Advanced Grants'). The substantial funding can amount to a maximum of €2 million for a Starting Grant, €2.75 million for a Consolidator Grant and €3.5 million for an Advanced Grant.