Can the findings of a paper become applied in the real world when they are turned into art?

A collaboration between IIASA and the Program for Evolutionary Dynamics at Harvard University. 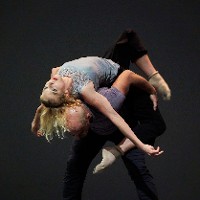 Since the 17 Sustainable Development Goals (SDGs) were adopted by UN countries, scientists and policymakers around the world have been working tirelessly to figure out how to achieve them by 2030. At the same time, we still know very little about the fundamental question of how to cooperate with future generations. The 2014 Nature paper titled ‘Cooperating with the Future’ provides evidence that a large majority of people would choose to cooperate with the future if they could jointly decide to do so through a global and binding vote. Translating scientific insight into policy development is however never easy, even if published results are considered enormously successful in terms of the number of citations it accrues. This prompts the question of whether art could be a vehicle to transmit scientific findings to society. 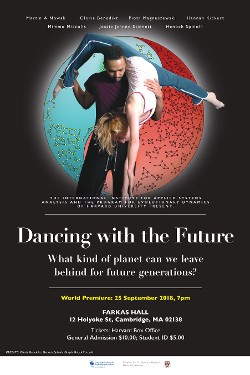 The Dancing with the Future research and performance project was designed to simultaneously innovate and generate impact. 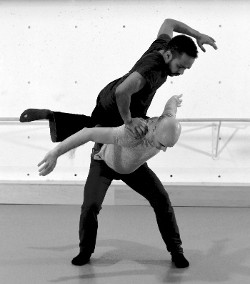 Grasping the mechanisms of cooperation humans are capable of using is becoming ever more important, as cooperation is a prerequisite for successful problem solving in an ever more interconnected world. Given that most people think in stories rather than in theories and numbers, it follows that dance, music, text, and visuals woven together could provide a human dimension to the theoretical mechanisms of cooperation and make them tangible to a broad and diverse audience.

Considering that global cooperation and cooperation with future generations are essential to their work, we wanted the project to be helpful to people who devote their lives to implementing the SDG agenda. Furthermore, we wanted to determine whether an interactive game closely integrated with the whole performance could engage general audiences who would then–by making decisions–not fall victim to the common trap of passivity, where audiences go home feeling enlightened but not compelled to act.

B. Preliminary preparations / Identifying the topic and structure

Building on the 2017 production InDilemma, which fused game theory, dance, and an interactive game to engage the audience in addressing resource inequality, the 2018 production Dancing with the Future investigates a question that is at the heart of sustainability, yet remains widely elusive. It is elusive because it entails a moral dimension that is very hard to embrace through modeling alone, namely, ‘what is the state of the planet that will be left behind for future generations?’ As future generations are unable to reciprocate (either directly or indirectly) to the current generation, traditional game theory cannot solve this dilemma. However, strong evidence provided by the Program for Evolutionary Dynamics at Harvard University shows that a global democratic, binding, voting process would result in humans being willing to leave enough resources behind for future generations. In addition, the evidence suggests that there is an altruistic majority of people who care about the future. This evidence was the starting point for the new production, which combines dance, game theory, evolutionary dynamics, and an interactive game.

Gloria Benedikt, Martin Nowak, and Piotr Magnuszewski determined the structure of the piece. They agreed on five scenes, where scenes 1, 3, and 5 would gradually build the mechanisms of cooperation, while scenes 2 and 4 would be devoted to turning the paper’s findings (which were based on lab experiments) into an interactive stage game. Martin Nowak composed the script for scenes 1, 3, and 5.

Gloria Benedikt and Mimmo Miccolis spent one week in the studio determining how to translate the script into a story that could be told through movement. Together with Martin Nowak, they established a storyboard for each scene. Working together ensured that the story would be compatible with the science and that it would be feasible to choreograph it. Benedikt and Miccolis then choreographed parts of the scenes. 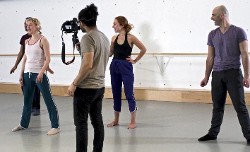 Particular challenges included creating a perfect sound file where music, text, and choreography could seamlessly come together. This involved shifting the text on the music file around until it fit with the choreography.

Working with two other dancers, Henoch Spinola and Sophia Isidore, Benedikt and Miccolis tested some of their choreographic ideas that required more dancers, and spent a day filming material to use in a trailer to promote the production. 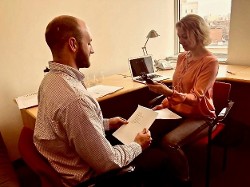 Jeffrey Gerold, a graduate student at the Program for Evolutionary Dynamics, displayed a natural talent as a voice artist. After receiving some coaching so he could act as narrator, Martin Nowak’s text was recorded.

Piotr Magnuszewski designed an interactive stage game based on the Nature research article and the text developed by Martin Nowak. Since game theory deals with more abstract games and the original game designed by Martin Nowak and his collaborators was meant to be run under experimental conditions, there was a need to adapt it. There were two big challenges in terms of the interactive game design. Firstly, the strictly controlled experimental settings of the original game had to be translated to accommodate theatre conditions where a large number of participants are restricted by the time allocated for the performance, and have limited options to indicate their decisions to the game facilitator. The game also needed to follow the flow of the performance with only minimal time available for explanations. Secondly, as the intended audience was policymakers, it was considered desirable to embed a more abstract game-theoretical representation in more realistic settings, where participants would be influenced by specific worldviews shared among the groups and the coalitions that they belonged to. Instead of using an abstract representation of resources, a more tangible view of a city dependent on extracted resources constrained by serious issues of inequality and pollution was used.

We expected that participants, when pushed to solve pressing current problems, would neglect the concern for future generations. This expectation was enhanced by preparing four specific roles with their descriptions emphasizing certain values. Similar to the original game, the decisions that participants would have to make as part of this first game embedded in the performance were designed to be made unilaterally. We planned to provide strong incentives for participants to ignore the future, which would lead to them finishing the first game with overall unsustainable outcomes.

The second iteration of the game, which was designed to be intersected by the delivery of the new knowledge on the mechanisms of cooperation, started with participants being asked to expand their roles and reestablish cooperation. With the new collective mechanism of decision-making and the binding vote, the new, more sustainable, results could be reached. Although not ideal, this was a step forward.

The game was designed to smoothly integrate with the dance sequences and to in effect make the audience a co-creator of the performance, thus making the whole experience more engaging and memorable, and resulting in a deeper learning experience.

Material gathered from rehearsal period one was processed both internally and externally. A press release and a trailer video were published to promote the project.

Benedikt finalized the artistic cast and briefed them. Apart from Benedikt herself, the cast included four additional dancers. Mimmo Miccolis and Hannah Kickert had both previously worked with IIASA, while Jessie Jeanne Stinnett and Henoch Spinola had extensive experience and an affinity for connecting art with science.

Technical requirements were kept to a minimum since lead-time for the New York conference performance was only two hours.

Sound and visual files were connected, and lighting cues designed to be as simple as possible. The only complication on the technical side was switching the screen operator between the backstage sound technician and Piotr Magnuszewski, who would be operating the game live from his laptop on stage based on the audience’s responses.

Visuals were chosen to provide a backdrop for the project and used where text and choreography alone would not have been able to convey the message. Editing of sound and visual files.

Cooperation was not only a theme of the piece but also a necessity to realize the project from its preparatory stages to its premiere on stage within just 10 days.

Day 1 started with a kick-off meeting, where the entire artistic and scientific cast worked through the storyboard, and discussed and resolved questions so everyone would be on the same page when rehearsals started. 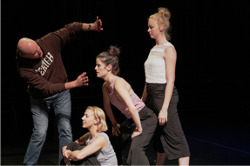 The next 4 days were spent in the studio creating the choreography for the mechanisms of cooperation (scenes 1, 3, and 5). On day 6 the sound and light cues were composed and delivered to the theatre. Days 7 & 8 were devoted to the games (scenes 2 and 4). Day 9 was spent in the theater for the technical and dress rehearsal. The premier of the Dancing with the Future production took place on day 10.

After our premiere of Dancing with the Future at Harvard University, scientists thanked me for helping them to understand new meaning within the scientific research presented through my performance. Their experience of the live performance elicited a keen sense of empathy that drew them into a deeper understanding of the scientific findings. This collaboration yielded a tri-fold, reciprocal impact for the artists, for the scientists, and for the public.
Our work helped to bridge the traditional gap between the creative team and general audience member. It can be that when a member of the public enjoys a performance, they leave the venue with a good feeling and a nice memory as a souvenir. I believe that our art form has the power to do more — to make a greater impact and to be appreciated as an inherent and necessary aspect of our society and culture. It is our civic responsibility to continue workshopping solutions toward global cooperation and cooperation with future generations. Dancing with the Future has encouraged me, on a micro scale, that this is a reasonable and plausible endeavor. With continued care, attention toward our common goals, compassion, listening, and risk-taking, we can understand one another through the process of creation regardless of what language we speak or where we were born. 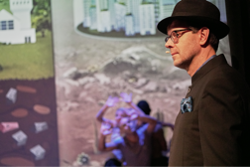 Dancing with the Future premiered at Harvard University’s Farkas Hall on 25 September 2018 and was also presented at the International Conference on Sustainable Development on 27 September during the 2018 United Nations General Assembly week in New York, both times to standing ovations.

Besides remarks on the science presented becoming more tangible, not only in terms of grasping it, but also in terms of understanding the potential for applying it in the real world, many participants pointed out that depicting the future generation through real people on stage whose fate they were asked to vote on, changed their perception. The commonly used phrase ‘future generation’ was no longer perceived as an abstract concept but as a reality that demanded responsible action now.

Both performances were recorded and a summary video was distributed through social media.

Sequel performances are currently being planned.

How might this work support the global transformation toward sustainability? 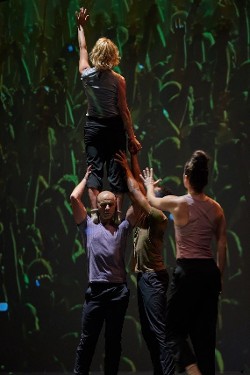 Humans think in stories rather than in terms of facts and theories, numbers or equations. This project showed that it is possible to fill theories with life by combining artistic and scientific knowledge and methods. This creates a new language that speaks both to the brain and to the heart.

If we were to not only inform society about scientific findings but to internalize scientific knowledge and compel people to act, such cross-disciplinary approaches combining different scientific and artistic languages will be key.

Production merges science with art to explain mechanisms of cooperation

Dance and science: A graceful partnership for change