How can artistic and scientific processes complement each other to generate better understanding and more informed decision making? 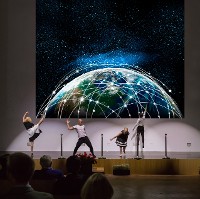 The anticipated US defection from the Paris Climate Agreement, Brexit, and North Korea’s nuclear program were among the topics dominating current affairs in 2017. Could these issues—and the options available to deal with them—be better understood if the science of conflict and cooperation, namely, game theory, were better understood? And could a fusion of the science of conflict and cooperation with the art of movement and cooperation support that understanding? In short, could dance breathe life into an abstract theory? Could the theory become accessible to a wider number of people as a consequence? And, thus, could it help them to make more informed decisions about current issues? These were some of the questions that led Gloria Benedikt, IIASA Associate for Science and Art, to embark on Project InDilemma, an unprecedented attempt to fusion game theory with dance through a co-creation process between scientists and artists.

The goal of the InDilemma project was twofold: to innovate and to generate impact.

Game theorists devote their lives to studying the dynamics of conflict resolution and cooperation. Meanwhile, dancers devote their lives to generating movement through cooperation. Could these two seemingly different worlds complement each other in a meaningful way and give unprecedented expression to game theory? And if so, what impact could this new alliance generate?

What would it take for audience members to walk away from a dance performance with new insights that would enable them to make better-informed decisions about the “real world”? With this in mind, a game was designed that would engage the audience in applying newly gained insights into the issue of global resource inequality.

For two months a scientific committee* at IIASA met on a weekly basis to discuss current affairs through the lens of game theory and to determine the topic for the performance piece—global resource inequality. Along the way, a first draft was developed for its structure.

Karl Sigmund composed the first draft of the text. Gloria Benedikt commented on how the text might be translated into choreography, while Piotr Magnuszewski looked at how the topic  might to be linked to an actual game. Magnuszewski and his team also developed the first sketches of a game that would challenge the audience to take a stance on the dilemma presented. Meanwhile, Benedikt confirmed and briefed the artistic cast on the progress, selected the music, and arranged the text recording with Narasimha Rao, Leader of IIASA’s Decent Living Energy Program. 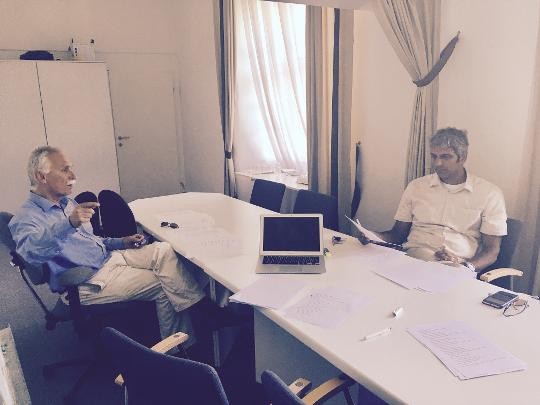 Whenever I introduce myself as a “game theorist” at a party, people’s faces light up, and I rarely have the heart to spoil things by explaining that the term “games,” for mathematicians, is just shorthand for “conflicts of interest” and involves lots of linear algebra. In general terms, of course, “games” cover an amazingly diverse range of behavior (games of luck, games of skill, parlor games). So, from time to time, I try to escape from the narrow confines of mathematical theory and give free rein to the homo ludens in me. This was why I eagerly joined the production of InDilemma simply because I had never done anything like it before. Little did I dream that I was in for a mind-opening experience in cooperation. The public was moved by the final outcome, but not nearly as much as I enjoyed the tortuous path which led to it, through countless discussions, rehearsals, and in vivo examples of conflict resolution.

The development of the interactive game component of InDilemma was an ambitious task, as it is was far from obvious how to meaningfully involve an audience of a few hundred people in the experience, how to read the decisions they would make, and how to provide them with feedback on the consequences of those decisions. The additional challenge was to design the whole activity to formulate the desired meanings and emotions in a very short time:  instead of the few hours often given for the game-play, here, the interactive part had to fit into under 10 minutes. 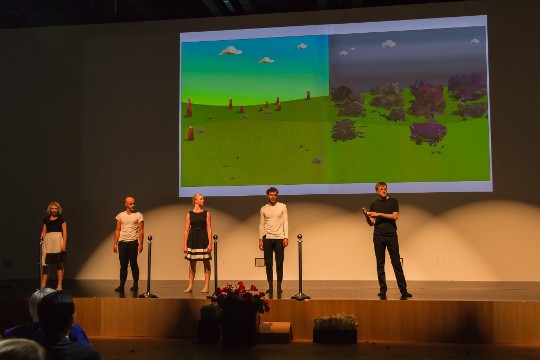 Piotr Magnuszewski and his team at the Centre for Systems Solutions (CRS) purposely started with a complex concept that involved more choice options for the audience. The design goal was to create an experience in which the audience was making the decisions and the dancers would visualize those

decisions and their consequences. Then, through a series of tests within the CRS team, together with consultations with Gloria Benedikt and the IIASA team, the concept was evaluated and stripped of any unnecessary elements.

During the tests, the need for additional visualization of the impact of players’ decisions on the natural environment emerged. This led to the creation of the interactive, animated visualization used in the final version of the game. The main concern then was then to make certain that the audience engaged in the activity. This was ensured by simplifying the number of gestures and actions required from the audience and making the rules of the game very clear to them. Overall, the design goals—to create an activity that channels sophisticated ideas through a highly emotional, easy-to-comprehend, artistic experience —were met. Further integration of the gaming elements within InDilemma took place during the rehearsals with Gloria Benedikt, the team of dancers, Karl Sigmund, and other IIASA staff who participated in rehearsals.

The artistic cast convened at IIASA for two days to discuss how the text could be turned into choreography. The main challenges were to not literally translate the text into movement word by word, but to identify metaphors that would visualize the text’s meaning, thus adding a new dimension and fusing artistic and scientific processes.

Music and visuals were agreed upon, the text recorded, and the sound and visual files were finalized.

For the main rehearsal period, the artistic cast convened at IIASA for ten days, working ten hours a day. For the first time, scientists were part of the artistic creation process. 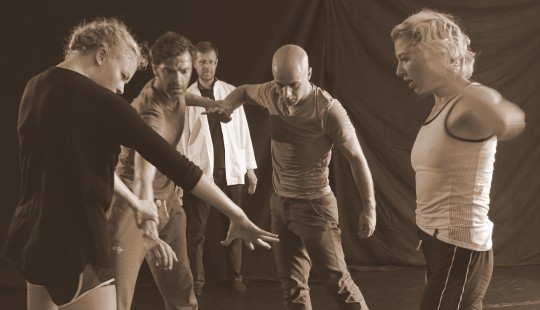 Karl Sigmund periodically joined rehearsals to answer questions the artists had regarding the text and assisted the choreographic process. Piotr Magnuszewski was cast as master of ceremonies. Together with the dancers, he also developed a semi-structured improvisation for the beginning and end of the piece, in which the audience was involved.

A trailer was shot and distributed on social media.

InDilemma premiered at the Political Symposium of the European Forum Alpbach on 29 August 2017 and was also live-streamed. The audience consisted of senior decision makers, students, and forum participants. Divided into four groups, they were asked to indicate if they needed more life space or if they had enough. The dancers, each representing one of the groups, then translated the group decision on stage. 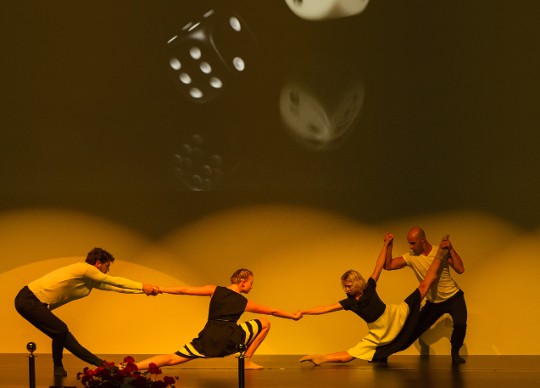 After about five minutes, half of the earth was symbolically destroyed, while income inequality remained unresolved. Magnuszewski, the master of ceremonies, then suggested looking at game theory. After the introduction to game theory, which  focused on the dilemma of the tragedy of the commons, the audience was asked to make decisions again, this time with an added option of sharing their resources. 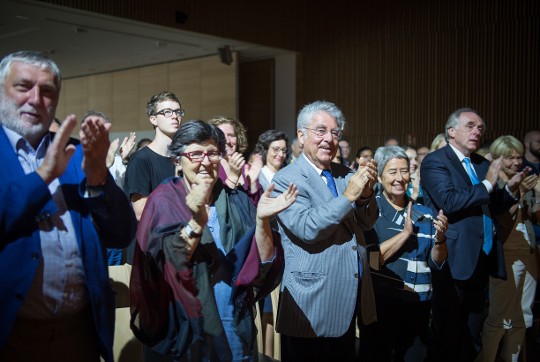 As no one could predict how the audience would react and how the piece would end,  the dancers were prepared for all eventualities. When the game was continued, the whole audience got up to share. A wave of emotion swept through the room. At the end, the environment was restored and inequality vanished. 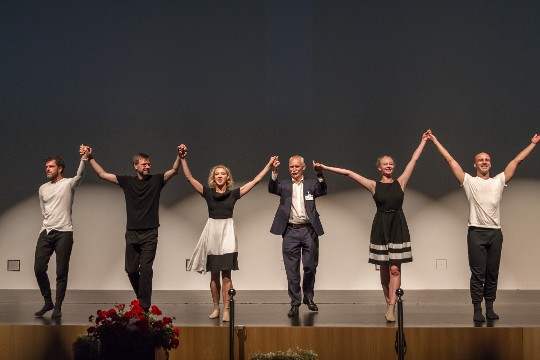 Footage from the live stream was edited into a ten-minute summary and distributed on social media. 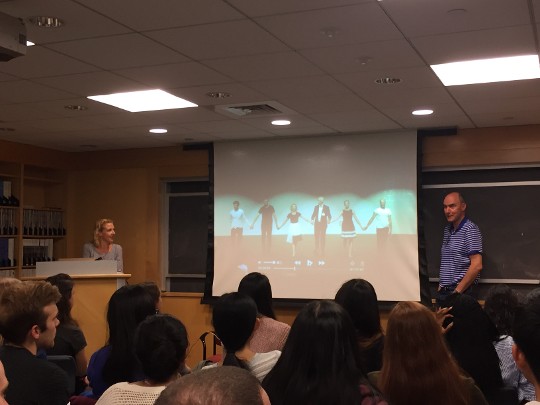 Three weeks after the premiere, InDilemma was presented to a group of students and researchers at the Program for Evolutionary Dynamics at Harvard University. The discussion that followed focused on what kind of audience the performance could make an impact on.

In October 2017 Gloria Benedikt was invited to present InDilemma as a best-practice example on how artists can support democracy building and participation at Stiftung Genshagen near Berlin.

In December 2017 InDilemma was performed on occasion of the OSCE Ministerial Council Meeting at the Hofburg palace in Vienna.

How might this work support the global transformation towards sustainability?

InDilemma shows how artistic and scientific processes can complement each other to generate better understanding and more informed decision making. By creating a narrative around an abstract theory, using music, dance, and visuals with narrated text, the theory acquired a new form, appealing to both reason and emotion. Bridging emotional and cognitive competences is considered to be a key competence of sustainability. InDilemma provides insights into the power of fusing artistic and scientific processes in order to strengthen this competence as well as into the potential of actively engaging audiences to understand and support the complex decision making involved in working to achieve sustainability.