In May, researchers gathered at Stanford University's Precourt Institute for Energy to discuss findings from the Global Energy Assessment. 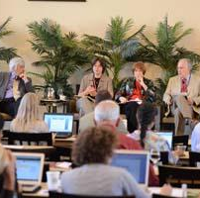 By Mark Golden, Precourt Institute for Energy at Stanford University

The world could supply affordable, modern energy to the 3 billion humans who do not have it by 2030, while simultaneously cutting greenhouse gas emissions, according to many of the contributors to the encyclopedic Global Energy Assessment: Toward a Sustainable Future.

Meeting that challenge would require $1.7-$2.2 trillion investment per year globally in energy, compared with the current level of about $1.3 trillion per year, said the scholars at a Stanford University conference on the work. However, the costs of climate change and of people living without modern energy services far outweigh the required investment, they said. For example, smoke from cooking indoors using coal, wood or cow dung as fuel without proper ventilation, for example, kills an estimated 2.2 million people annually, mostly women and children.

“The opportunity to improve people’s quality of life is so great,” said Sally Benson, Stanford professor and acting director of the Precourt Institute for Energy, which hosted the international meeting. “Clearly, nobody should ever cook indoors with traditional biofuels. Cost effective and sustainable alternatives are urgently needed.”

To limit the Earth’s warming to 2 degrees Celsius–a longstanding benchmark above which the consequences of climate change are considered catastrophic–greenhouse gas emissions must begin to decline this decade.

“It’s not easy, but it is doable,” said Nebojsa Nakicenovic, deputy director of the International Institute for Applied Systems Analysis, which published the Global Energy Assessment (GEA). “We need really fundamental changes, but the assessment shows how it can be done. It gives pioneers an opportunity to start the change.”

The GEA found that renewables must play a major role in achieving low-carbon energy supplies for everyone in the coming decades, but it also found that renewables are already contributing. Newrenewables, which excludes traditional biomass like wood and large hydropower plants, supplies 4 percent of the world’s energy needs, said Wim Turkenburg, retired professor of Utrecht University’s Science, Technology & Society Department. Meanwhile, the potential energy available from new renewables like solar, wind and geothermal is several times greater than global energy consumption. The challenge is to harvest that potential more efficiently and less expensively.

“Wind energy has seen huge increases in the last five years, close to 30 percent a year,” said Turkenburg. “The installed capacity of solar photovoltaic power has increased 45 percent a year over the past 5 years, and solar electricity is becoming competitive with grid electricity, especially for small consumers in western Europe.”

Overall, global investments in new renewables grew from $2 billion in 1990 to $190 billion in 2010, he added. More than 100 countries now have renewable energy targets in place and have instituted policies to support the renewable power sector financially.

Speaker after speaker at the Stanford conference stressed that the heavy investments needed must come primarily from the private sector, not government budgets. Extending clean energy to the developing world will require not subsidies but “going to the villages with an economically viable business model, something that has clear benefits for the consumer and is affordable,” said Nagesh Rao Parthasarathi, India’s consul to San Francisco.

Nevertheless, strong economic arguments were made for the transformation. For example, the amount of energy used to heat and cool the world’s existing buildings could be cut nearly in half through efficiency retrofits and behavior change. That would require $14 trillion in investment, though it would save $58 trillion in energy costs, said Diana Urge-Vorsatz, a professor at the Central European University in Budapest and coordinating lead-author on the chapter on building energy efficiency.

And speakers agreed that the image of a world powered purely by renewable energy within this century is unlikely. “Coal, nuclear and natural gas will continue to be important energy sources in many parts of the world. Don’t throw out the traditional energy sources, which will remain very important,” said co-author KurtYeager, former president of the Electric Power Research Institute and co-founder of the non-profit Galvin Electricity Initiative.

Capturing and storing the carbon dioxide emissions from continued fossil fuel use will be needed if greenhouse gases are to be significantly reduced, said Benson, lead author of the GEA’s chapter on carbon capture and storage. The technology is available, she said, but costs must be reduced. For that to happen, many more coal-fired power plants need to experiment with the technology to hasten the learning curve. The technology could eventually be applied to emission sources other than coal, said Benson, who is also the director of Stanford’s Global Climate & Energy Project.

Transforming the world’s energy system will require many changes occurring simultaneously and overcoming the incumbency of existing policies, said AnandPatwardhan, a public policy professor at the University of Maryland and co-chair of the GEA project. Beneficiaries of the entrenched and large subsidies on kerosene in India are an example of the vested interests that will resist change, Patwardhan said.

“Heterogeneity in circumstances, contexts and priorities will require variety in policy packages,” said Patwardhan. “Technology is important, but it is equally important to address institutions, consumer preferences, market behaviors, skills and capacities.”

Speakers agreed that emitting greenhouse gases into the atmosphere ought to cost money, whether in the form of a tax on carbon or through the purchase of emission allowances, to cover the costs to society of damaging the climate.

“We must start to charge for these external costs,” said Arun Majumdar, director of energy initiatives at Google.org and former director of the U.S. Department of Energy’s Advanced Research Projects Agency-Energy. “Carbon capture and storage most likely won’t go anywhere in the United States unless there is a carbon price.”

Cleaning up fossil fuel pollution would have benefits well beyond climate change. The global health care costs associated with coal-fired power plants are estimated at $110 billion a year, said Alexander Ochs, director of climate and energy at the Worldwatch Institute.

All chapters of the 1,800-page GEA is downloadable for free here, as is a summary.

By Mark Golden, Precourt Institute for Energy at Stanford University