What can be done to make cities more sustainable in terms of energy? 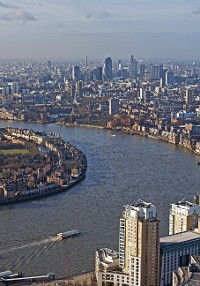 More than half of the global population already lives in urban settlements. Urban areas, moreover, are projected to absorb almost all the global population growth to 2050, amounting to some additional three billion people. Ensuring the provision of affordable, secure and clean energy in this increasingly urbanized world presents a significant challenge. What can be done to make cities more sustainable in terms of energy?

Based on even the lowest forecasts of urbanization, the world will not only be 70% urban by 2050, but the world urban population will also be larger than the entire global population today. Addressing the specific energy issues raised by an increasingly urbanized world is one aim of the recently launched Global Energy Assessment (GEA). Coordinated by IIASA and involving many of the world’s leading energy and urbanization experts, the GEA aims to provide the first ever fully integrated energy assessment analyzing energy challenges, opportunities, and strategies for developing, industrialized and emerging economies. “Our objective within this major undertaking,” explains Arnulf Grubler, who is Convening Lead Author for the GEA’s chapter on urban energy systems, “was to use a systemic perspective to focus on the specific energy challenges and opportunities represented by increasing urbanization and provide a better understanding of urban energy use.”

Providing robust measurements of urban energy use was a key initial aim. Measuring the energy use of cities, however, is no easy task, with the difficulties compounded by the absence of widely agreed measurement concepts, systems boundaries, and data-reporting formats. In the GEA, researchers provide the first-ever comparative assessment of existing approaches to measuring urban energy use and discuss advantages and shortcomings of alternative energy and emission accounting methods at an urban scale. Based on a synthesis of entirely new data on energy use in cities, the GEA concludes that urban energy use already accounts for 60–80% of global energy use. Energy-wise the world is already predominantly urban.

New findings outlined in the GEA, however, suggest that the traditional view of urban systems as being resource-wasteful in terms of energy may be misplaced. The GEA data set reveals that in many industrialized countries the per capita direct, final energy use of city dwellers is often lower than the national average. This is partly due to differences in economic structure (more services) and also higher population densities (less single family dwellings). More crucially, it reflects the fact that public transport, which is not economically viable in low-density suburban or rural areas, reduces urban transport energy demand.

A further novel finding is the identification of a new urban North-South divide in terms of energy intensiveness. Whereas OECD cities (even in North America or Australia) generally have lower (direct) final energy use compared to their respective national averages, most cities in developing countries have higher per capita consumption levels than the national average. In other words, urban dwellers in developing economies use substantially more energy per capita than their rural compatriots—a reflection of much higher average urban incomes as well as the frequent location of industrial activities in urban areas in emerging economies.

Despite these variations, it is clear that urban energy use will continue to grow further as a fraction of total global energy needs. In addition, the ability to provide affordable, secure and clean energy will become ever more critical for the successful operation of cities and the well-being of their inhabitants. Already several hundred million urban dwellers in low- and middle-income nations lack access to electricity and are unable to afford cleaner, safer fuels. Many live in informal settlements where they also lack basic services such as water, sanitation and transport. Rapid migration rates and urban population growth can quickly overwhelm the provision of basic urban services, particularly to the poorest urban dwellers. How can the energy challenges posed by rapid urbanization best be addressed?

In the past, it seemed sufficient to face these challenges with essentially up-stream (supply-side) policy interventions. Now, the potential of supply-side measures such as increased reliance on renewable energies at the urban scale appears comparatively limited. New GEA estimates, for example, suggest that locally harvested renewables can, at best, provide 1% of the energy needs of a megacity and just a few percentage points in smaller, low-density cities.

Future energy sustainability challenges, Grubler points out, will need to be tackled primarily by action in urban settings. And priorities for urban energy and sustainability policies, researchers suggest, should focus where local decision making and funding also provides the largest leverage effects. Crucially, these actions and policies will need to focus on demand management including, for example, a drive toward more energy efficient buildings, the structuring of urban form and density in ways that are conducive to energy efficient housing, as well as the provision of high-quality public transport services (i.e., the promotion of energy-efficient and eco-friendly public transport and non-motorized mobility options) and, lastly, greater urban energy systems integration. The GEA chapter also provides a novel quantification of the impacts on urban energy use of alternative policies drawing an a novel spatially explicit, combined agent-based and optimization model labelled SynCity. Admittedly, such a demand-side focus at the urban scale will require a paradigm shift compared to the traditional, more supply-side energy policy focus at national scale.

A common characteristic of sustainable urban energy systems options, Grubler explains, is that they are usually systemic; for example, the integration of land-use and urban transport planning that extends beyond traditional administrative boundaries; the increasing integration of urban resource streams, including water, wastes, and energy that can further both resource (e.g. heat) recovery and improve environmental performance; and the reconfiguration of urban energy systems to enable step changes in efficiency.

Yet, this systemic perspective reveals a new kind of “governance paradox.” Whereas the largest policy leverages are from systemic approaches and policy integration, these policies are also the most difficult to implement and require that policy fragmentation and uncoordinated, dispersed decision making be overcome. The urban governance paradox is compounded by weak institutional capacities, especially in small- and medium-sized cities that are the focus of projected urban growth, as well as from the legacies of market deregulation and privatization that have made integrated urban planning and coordinated energy, transport, and other infrastructural policy approaches more difficult to design and even more difficult to implement.

However, there are good reasons for cautionary optimism, Grubler concludes. The task ahead is to leverage fully the innovation potential of cities and to scale up successful experiments into transformative changes in energy systems. Hence, in the drive for greater energy sustainability in the cities of the future, individual and collective learning, transfer of knowledge, and sharing experiences and information across cities and among stakeholders will have a key role to play.

Arnulf Grubler is an expert on the interplay between energy and technology systems and their implications on the environment, in particular on climate change. He shares his time between leading the Transitions to New Technologies research program at IIASA, and teaching graduate students at Yale University.
Print this page