Telling the story of the changing Arctic through theatre

The Arctic Futures Initiative will collaborate with playwright and research artist Chantal Bilodeau on developing work at the intersection of art and science that promotes a deeper understanding of changes in the Arctic, their impact on human and non-human lives, and how, ultimately, it connects us all. 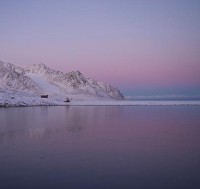 For most people, the Arctic is a remote and desolate place that has no bearing on their day-to-day life. They see the news and hear the statistics, but the reality of thawing permafrost and disappearing sea ice remains distant and hard to grasp.

The arts in general, and theatre in particular, can be useful tools to reduce the distance not only between the polar cap and major urban centers, but also between Arctic people and the rest of the world. By “translating” climate change into meaningful stories, theatre can trigger reflection, generate empathy, and foster new ideas. It can help people imagine different ways of being and relating. It can also make the crisis visible, audible and felt.

One such theatre project is The Arctic Cycle. Conceived in 2009 by New York playwright and research artist Chantal Bilodeau, it consists in a series of eight plays that look at the social and environmental changes taking place in the eight countries of the Arctic. Operating on the principle that complex problems must be addressed through collaborative efforts, each play engages artists across disciplines as well as geographic and cultural borders; solicits input from earth and social scientists; and actively seeks community and educational partners to foster public conversations and provide strategies for action.

The first play of the Cycle – Sila, set in Canada – examines the competing interests shaping the future of the Arctic and local Inuit population. Set on Baffin Island in the territory of Nunavut, it follows a climate scientist, an Inuit activist and her daughter, two Canadian Coast Guard officers, an Inuit elder, and two polar bears as they see their values challenged and their lives become intricately intertwined.

The second play – Forward, set in Norway – presents a poetic history of energy development in Norway from the initial passion that drove explorer Fridtjof Nansen to the North Pole, to the consequences of decades of fossil fuel addiction. A blend of theatre and electropop music, the play progresses backwards from 2013 to 1893, and zeroes in on close to 40 characters whose lives illustrate how the choices we make often have unintended consequences.

Chantal Bilodeau was in residence at IIASA in September 2016 as part of the first Citizen Artist Incubator. To gather research for her third play, currently titled Migration, she talked to scientists in the Arctic Futures Initiative, the World Population program, and the Evolution and Ecology program. Migration will be a one-woman show that follows the migration of several females – both human and animal – within, as well as in an out of Alaska, against a backdrop of climate change. You can watch her final presentation here. 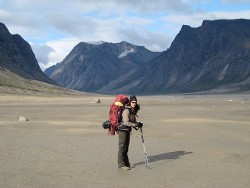 Art and science are humans’ two fundamental ways of understanding the world. Science provides concrete information about the structure and behavior of the physical and natural world. Art uses the power of imagination to help us shape ideas and feelings, and investigate our place on earth. Together, the plays of The Arctic Cycle will chronicle our evolving relationship with the human and natural worlds over the next decade, and examine how our new reality affects who we are and how we live.