This is the second workshop in the framework of the IIASA’s project on “Challenges and Opportunities of Economic Integration within a Wider European and Eurasian Space”. 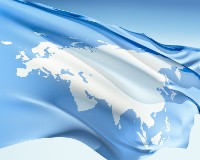 World-wide international economic policies during the last few decades have been exhibiting a rising interest towards regional integration in various new forms and diversity. Not only has the number of regional integration arrangements expanded, but, even more strikingly, their scope and depth have advanced in a spectacular manner. The establishment of the Customs Union of Russia, Belarus and Kazakhstan (RBK-CU) in 2010 and its subsequent evolution into the Single Economic Space (SES) in 2012 represents a prominent current example of the regional economic integration in northern Eurasia. Authorities in the RBK-CU/SES envisage deepening this regional integration even further with the intention of establishing on their bases the Eurasian Economic Union (EAEU). Other Commonwealth of Independent States (CIS) countries, in particular Kyrgyzstan and Armenia, also expressed an interest in joining these integration arrangements.

Research and expert communities are now challenged to provide solid, independent and comprehensive support to policy-making on plausible future scenarios and optimal schemes of economic integration within the EAEU, and also between the EAEU and its strategic partners, notably the EU.

The workshop is expected to discuss:

The international and interdisciplinary research project “Challenges and Opportunities of Economic Integration within a wider European and Eurasian Space”, which was launched by IIASA in 2013, aims to discuss and analyse issues of economic integration within the Eurasian continent. European and Eurasian cooperation extends to the key Asian players, such as China, Korea and Japan, as well as the USA. The multidisciplinary approach of the project include economic, technological, institutional, demographic, sectorial (finance and investment, energy, infrastructure, etc.) aspects of Pan-European/Eurasian development.
The three-year research project consists of a series of workshops at which specific aspects of integration are discussed by scientists and stakeholders representing all interested regions; follow-up discussion summaries outline the state-of-the-art in this field and reflect on different futures.
The project has been discussed and initially supported by the European Commission, the Eurasian Economic Commission, the Eurasian Development Bank, the Russian Academy of Sciences, and some other European and Eurasian institutions.
As a result of this project’s international multidisciplinary and independent nature, it is well positioned to provide scientific substantiation in support of possible options for trade policies across all major parties involved in this region, in addition to its scientific methodological contributions.

Photos from the Workshop

Modeling the future of the Eurasian economic space

Conference on Deepening and Enhancing of Eurasian integration