Land use foresight modeling for Indonesia, Brazil and the Congo Basin

In this project, we study the effects of Intended Nationally Determined Contributions (INDCs) and large-scale reforestation plans in Brazil, the Congo Basin and Indonesia as well as the contribution of the zero deforestation pledge by large scale palm oil companies in Indonesia, on the evolution of forest and other land cover, climate change mitigation, food security and international trade of palm oil, beef and soy. 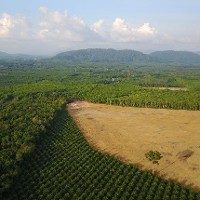 The Intended Nationally Determined Contributions (INDC’s) presented at the Paris climate summit in 2015 will be developed into binding commitments subject to scrutiny every 5 or 10 years. Also, many countries and actors are building Low Emission Development Strategies (LEDS) to coherently advance national climate change and development policy.

Large-scale forest restoration could significantly contribute to climate change mitigation. For instance, the Bonn Challenge is proposing to restore 150 million ha of forests and landscapes by 2020. In the New York declaration on Forests, a restoration objective of 200 million ha by 2030 is set. Meanwhile, private initiatives such as the major palm oil producers, traders, retailers and consumer goods companies having committed to source zero-deforestation palm oil only, could largely reduce emissions from deforestation.

In this project, IIASA supports the Center for International Forestry Research (CIFOR) in the framework of the Evidence Based Forestry (EBF) funded by the UK Department for International Development (DFID), in better understanding how these different measures could affect the land-based sectors and GHG emissions at the national and global scale. The GLOBIOM model will be used for this assessment, with a focus on three tropical regions: Indonesia, Brazil and the Congo Basin. This project also builds on the IIASA Tropical Futures Initiative (TFI) - the initiative recently also launched the RESTORE+ project - which aims at addressing tropical deforestation by developing sustainable land use options.

IIASA-ERD researchers will improve the GLOBIOM model for Indonesia by using and harmonizing the best available datasets, and further refining the palm oil sector in Indonesia. The improved representation of the palm oil sector will be based on updated global oil palm suitability map and the long expertise of CIFOR in this sector. Moreover, using previous work accomplished during the REDD-PAC and CoForTips projects for Brazil and the Congo Basin, the tropical branch of the model is further consolidated.