Thinking outside the box on climate mitigation

A new article lays the groundwork for alternative climate mitigation scenarios that place less reliance on unproven negative emissions technologies in the future. 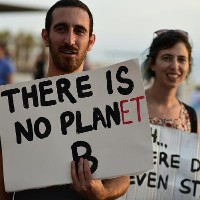 In a new commentary in the journal Nature Climate Change, IIASA researchers argue that a broader range of scenarios is needed to support international policymakers in the target of limiting climate change to under 2°C above pre-industrial levels, and to avoid potential negative environmental and social consequences of carbon dioxide removal on a massive scale.

“Many currently used emissions pathways assume that we can slowly decrease fossil fuel emissions today and make up for it later with heavy implementation of negative emissions technologies,” says IIASA Ecosystems Services and Management Program Director Michael Obersteiner, lead author of the article. “This is a problem because it assumes we can put the burden on future generations--which is neither a realistic assumption nor is it morally acceptable from an intergenerational equity point of view.”

The researchers point out that 87% of the scenarios in the IPCC 5th Assessment Report that limit climate change to less than 2°C rely heavily on negative emissions in the second half of the century, with most of the carbon dioxide removal coming from a suite of technologies known as Bioenergy with Carbon Capture and Storage (BECCS). Assuming that it’s even possible to deploy BECCS on the scale required (a big question for a technology that has not yet been widely tested or implemented), massive implementation of land-based carbon dioxide removal strategies would have impacts on both the environment and the food system, with previous research showing trade-offs for food security and environmental conservation.

At the same time, reliance on future negative emissions to achieve climate goals may also fail to account for feedbacks in the climate system such as methane release from thawing permafrost, which are not yet fully understood.

“Many of our scenarios do not account for the uncertainties related to the climate mitigation process. Are our carbon budget estimates reasonable? Are the technologies going to develop the way we need them to be? Are natural carbon sinks reliable, or might they turn around?” says IIASA researcher Johannes Bednar, a coauthor.

In the article, the researchers present four archetype scenarios that incorporate a broader range of potential mitigation options. These include:

Under all these scenarios, current country commitments under the Paris Agreement would not be sufficient to achieve the required cuts, the researchers say.

The article adds to a large body of significant IIASA research on pathways and scenarios for climate mitigation, as well as integrated research on climate and other sustainable development goals. It also provides a critical look at the current outlook for reaching climate targets.

IIASA researcher Fabian Wagner, another study coauthor adds, “In this paper we have shown that negative emission technologies may not only be an asset but also an economic burden if not deployed with care. We as scientists need to be careful when we communicate to policymakers about how realistic different scenarios might be. When we present scenarios that require the world to convert an amount of land equivalent to all today’s cropland to energy plantations, alarm bells should go off.” 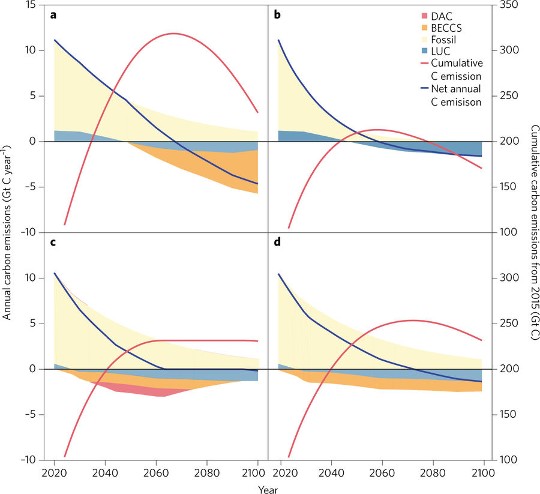 Figure: Projections are based on a threshold exceedance budget of 232 Gt C for 2015–2100 including an RCP8.5 non-CO2 forcing23. Blue lines depict annual net C emissions, red lines are cumulative C emissions. a, Late-Century CDR: late century BECCS deployment results in a substantial overshoot of cumulative emissions (half-life of fossil phase-out = 25 years). b, Rapid Decarbonization: a carbon law with 10 years half-life makes CDR obsolete since cumulative emissions stay well below the budget. c, No Overshoot: CDRs ramp up early and phase out towards the end of the century to avoid an overshoot in cumulative emissions, BECCS is limited to 1.2 Gt C per year (equalling the BECCS capacity of the Minimize CDR archetype), and the remainder is captured by DAC (half-life of fossil phase-out = 25 years). d, Minimize CDR: BECCS is spread evenly over the century thereby minimizing its capacity. No other CDRs are deployed (half-life of fossil phase-out = 25 years). The C-price for the Agriculture, Forest and Other Land Use (AFOLU) sector for a and b increases exponentially from US$0 (in 2020) to US$200 (in 2100); for c and d it is constant at US$40 (year 2000) per t CO2.