A new analysis examines the interconnections between the Sustainable Development Goals, identifying policy pathways that lead to trade-offs, and others that could bring benefits on multiple fronts. 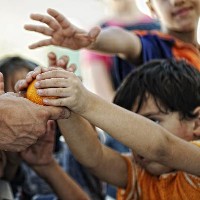 As world leaders gather in New York for the UN General Assembly, one year after the formal adoption of the Sustainable Development Goals (SDGs), a new study published in Science Advances, the online journal of Science magazine, finds that policies focused solely on the environment tend to increase food prices. However, the study goes on to identify sustainable consumption and production practices as key to achieving both environmental and food security targets simultaneously. The study also emphasized the need for timely action, showing that delayed action on climate and land use could lead to even greater food price increases.

“We find a general trade-off between policies designed to protect the environment, and those designed to reduce food prices,” explains IIASA researcher Brian Walsh, who co-led the study along with IIASA Ecosystems Services and Management Program Director Michael Obersteiner. “Yet there are some broader policies that can reduce these trade-offs, reduce the pressure on the system overall so that there’s more room to achieve multiple goals.”

The study, conducted in collaboration with researchers from Australia, China, and the Netherlands, assessed the interconnections among 10 of the 17 Sustainable Development Goals (SDGs), dividing closely related goals and targets into seven “policy clusters” and associating each cluster with a set of policy responses that address only those goals. In this way, the study examined the wider impacts of “siloed” responses to the SDG agenda in terms of global food prices and environmental indicators.

The study focused on goals that address the land nexus—those related to resource cycling, land use change, and agriculture—and used the IIASA Global Biosphere Management Model (GLOBIOM) to analyze the web of interactions among environmental conservation, agricultural production, and food prices under a variety of demographic and economic futures.

The most effective measure for achieving multiple goals, the researchers found, was to reduce the share of meat in Western diets. On a per-calorie basis, livestock production requires far more land than crops, so reducing meat consumption in developed economies is one of the simplest ways to free up land and water resources. More than any other single response to the SDGs, this shift could increase total food production while mitigating the expansion of agriculture into natural ecosystems. Just as importantly, it would create space for developing countries to combat undernourishment by increasing their intake of animal products.

A second key measure, according to the researchers, would be increasing the resource use efficiency of agricultural production systems. For example, low-waste fertilization and irrigation practices and food spoilage mitigation increase agricultural productivity and reduce food prices without leading to greater pollution.

Both of these interventions had the effect of improving overall environmental outcomes without increasing food prices. IIASA researcher Stefan Frank says “If you aim towards policies like these that reduce the total pressure on the system, you reduce the trade-offs between food prices and environmental impacts and increase the solution space for multiple SDGs.”

The study, which looks forward to 2030 and 2050, also examines the role of population growth and economic development by including three different scenarios from the Shared Socioeconomic Pathways (SSPs), a set of pathways that define a range of possible future demographic and socioeconomic developments. The study finds that demography, in this case, is not destiny—to the contrary, well-crafted policy responses to the SDGs are much more consequential for the achievement of the agenda than population and economic growth trends given the range of current scenarios.

A third major finding was that timing matters. “The longer we put off sustainability initiatives, the greater their eventual costs will be on food prices and, by extension, food security” cautions IIASA researcher Petr Havlík, who leads the GLOBIOM team. This finding echoes recent work from IIASA energy researchers, which showed that delaying on climate policy will make the adaptation challenge even more difficult.

The study is one of the first outcomes of a new body of research focused on systemic analysis of the interconnected Sustainable Development Goals, led by IIASA scientists, for example The World in 2050 initiative launched last year.

Obersteiner says, “If we are serious about achieving all 17 of the SDGs, we need much more of this type of research that looks beyond sectors and policy silos, to assess system-wide impacts of policy responses. We show that not only is it possible to avoid trade-offs, but also that there are things we can start doing today that will bring us closer to reaching all the  SDGs.”