Analysis and interpretation of demographic indicators in Russia

World Population Program Deputy Director Sergei Scherbov delivered a lecture  on demographic issues in Russia in the framework of a high level training program for politicians and administrators. 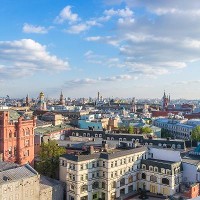 The development of the top management reserve in Russia is the aim of an annual government training program which is held for the 6th time this year. Participants of the program include deputy ministers, regional ministers, members of the Russian parliament, top regional politicians and managers, top managers of state corporations, and other top level administrators.

Implemented by the Russian Presidential Academy of National Economy and Public Administration (RANEPA) this high level program consists of several modules covering the most pressing social, political, economic and managerial challenges within Russia and in the international framework.

Program module 3 was held between 13-16 September 2017 in Moscow. Among the invited lecturers were Russian state ministers, representatives of business, rectors of major Russian universities, and prominent speakers from outside of Russia, including former Prime Minister of Finland Esko Aho, and speakers from international scientific institutions such as Cambridge University, Massachusetts Institute of Technology (MIT),Yale,  and Stanford University.

IIASA researcher and World Population Deputy Program Director Sergei Scherbov was one of the invited lecturers on 13 September. Under the title “Analysis and interpretation of demographic indicators. Russian Demographic Sheet” he discussed the demographic aspects of regional and global change. His focus lied on the recently published Russian Demographic Data Sheet that he put together with his team at IIASA and collaborators at RANEPA and Rosstat. In his presentation Scherbov paid attention on  the proper use of demographic indicators in the evaluation and monitoring of the demographic situation in the country. A new approaches of measuring ageing developed at IIASA was also presented and received  a lot of interest by participants during the discussion that followed the presentation.

For many years, Scherbov has conducted research in the field of aging and developed new measures of age and aging together with colleagues. He is currently principal investigator of the ERC funded Reassessing Ageing from a Population Perspective (Re-Ageing) project that, among other things, ascertains the extent to which advanced societies are actually aging in multiple dimensions, including health, cognitive abilities, and longevity.