IIASA scientists will present latest research on aging at the 50th anniversary and international conference at the Center of Population Studies, Lomonosov Moscow State University. 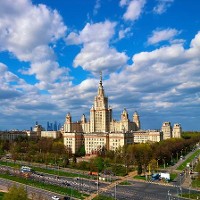 On the occasion of the 50th anniversary of the Center of Population Studies at the Faculty of Economics, Moscow State University, the university is hosting an international scientific conference entitled "Demographic education and population studies in universities" from 18 -20 October 2017. Participants of the conference include high rank scientists from Russian and international research institutes, including  the Russian Academy of Sciences, and Russian Federation government officials.

Two IIASA scientists from the World Population Program (POP) will present latest research from the ERC funded Reassessing Ageing from a Population Perspective (Re-Ageing) project during session 4, on 19 October 2017 between 11.15PM-1.30PM. The session will look at the analysis of the problems of health, life expectancy, mortality in Russia and the world in the context of the concepts of human capital and human development.

POP Program Director Sergei Scherbov will give a presentation entitled “Gender Inequality in Survival in Older Ages”. It is based on research he conducted together with Warren Sanderson and was published as IIASA Working Paper this year.

Dalkhat Ediev will present an estimate of the remaining life expectancy at old age by revisiting Horiuchi, Coale and Mitra, work that is based on previously published studies.

For many years, Scherbov has conducted research in the field of aging and developed new measures of age and aging together with colleagues. He is currently Principal Investigator of the Re-Ageing project, that, among other things, ascertains the extent to which advanced societies are actually aging in multiple dimensions, including health, cognitive abilities, and longevity. The new developed measures of aging were recently included in the World Population Ageing 2017 report and are now part of the UN calculations on future aging.

including new measures of aging developed at IIASA