The first Russian Demographic Data Sheet provides a comprehensive look at key demographic indicators and main population trends for all Subjects of the Russian Federation, including population projection for 2035. 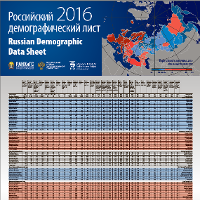 The Russian Demographic Datasheet 2016 shows key demographic data, population trends and projections until 2035. It covers fertility, mortality, migration, population structure including population ageing and their changes. The datasheet combines data for the national level, all regions and districts, and features maps, population pyramids, rankings, graphs and a glossary. It pays special attention to the importance of alternative indicators of population ageing for the current and future population changes across Russia. All information is provided in both languages, Russian and English. The project is a collaboration between IIASA, the Russian Presidential Academy of National Economy and Public Administration (RANEPA), and the Russian Federal State Statistics Service (Rosstat).

The work on the data sheet was lead by World Population Deputy Program Director Sergei Scherbov, expert in this fields of demographic modelling, population projections, data processing and presentation, and measuring aging. Together with Warren C. Sanderson,  Scherbov has developed new methods of the analysis of aging that take characteristics of people into account. Their research has been published in major scientific journals, including Nature and Science. He is currently Principal Investigator of the European Research Council funded Reassessing Ageing from a Population Perspective (Re-Ageing) project at IIASA that, among other things, ascertains the extent to which advanced societies are actually aging in multiple dimensions, including health, cognitive abilities, and longevity. 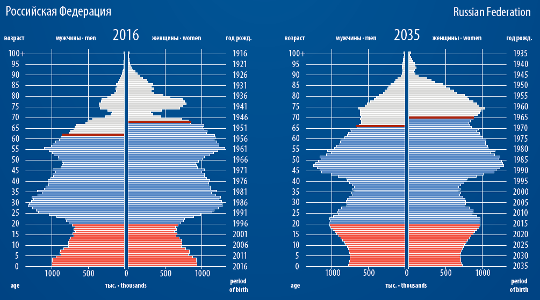