In recognition of his knowledge and expertise in Population Studies and the outstanding contribution he has made in the field, Chulalongkorn University honors Sergei Scherbov with a Doctoral Degree in Liberal Arts (Honoris Causa). 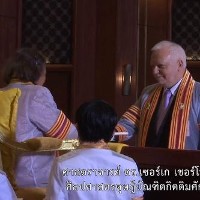 Chulalongkorn University Council has awared IIASA World Population Program (POP) Deputy Director Sergei Scherbov a Doctoral Degree in Liberal Arts (Honoris Causa) in recognition of his knowledge and expertise in Population Studies and the outstanding contribution he has made in the field. The official ceremony will take place on 3 October 2019 at 2PM in the Main Auditorium of Chulalongkorn University. It will be an audience with Her Royal Highness Princess Maha Chakri Slrindhorn.

POP at IIASA and the College of Population Studies (CPS) at Chulalongkorn University have a long tradition of collaboration particularly in the research fields of aging and climate change adaptation with a focus on Asia. Since 2002, Sergei Scherbov has conducted “hands on” courses in the field of demographic analysis, new methods and concepts in demography, population projections, and computer applications with a focus on aging societies for junior scientists and early-to mid-career professionals from around the world at the CPS to share IIASA research with an international audience.

For many years Scherbov together with Warren Sanderson have developed new measures of age and aging in demographic research. They suggest to broaden research methods to account for significant increases in life expectancy, as the focus on chronological age of people alone provides a limited picture of the process, one that is often not appropriate for either scientific study or policy analysis. Their groundbreaking results have been published in Nature and Science and other high level journals. In 2012, Scherbov received an ERC Advanced Grant for his Reassessing Ageing from a Population Perspective (Re-Ageing) project at IIASA that, among other things, ascertains the extent to which advanced societies are actually aging in multiple dimensions, including health, cognitive abilities, and longevity.

Demographic analysis with applications to aging and health