By including educational attainment as demographic dimension in addition to age and sex, the message derived from the Demographic Dividend Model changes for describing the effect of demographic change on economic growth. 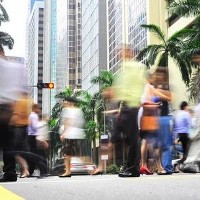 The conventional Demographic Dividend Model views fertility decline as an exogenous trigger for an increasing proportion of the population being in the working ages, which under certain conditions (good governance, investments in education, etc.) can lead to higher productivity and faster economic growth (Model A in the chart below). The Education-triggered Dividend Model views the same empirically observed correlation between the proportion of the population in the working ages and higher productivity as resulting from the joint effect of higher educational attainment on fertility decline and also, independently, on higher productivity (Model B in the chart).

In the recent study Jesus Crespo Cuaresma, Wolfgang Lutz, and Warren Sanderson demonstrate the empirical validity of the alternative Model B which assigns to education the dual role of helping to bring down fertility and enhancing productivity. In other words, in periods of expanding educational attainment, improvements in the education of women of childbearing age contribute to declining birth rates, while at the same time a more productive workforce (due to the increases in human capital) populates the labor market. The empirical analysis shows that most of the economic growth effect, which under the conventional model A is attributed to the change in age structure, now turns out to be a result of the dual effect of education on fertility and productivity. Model B also provides a more optimistic outlook for the future because the strong productivity-enhancing effect of human capital does not necessarily vanish over time and even aging populations can see continued productivity growth as a function of further improving human capital. 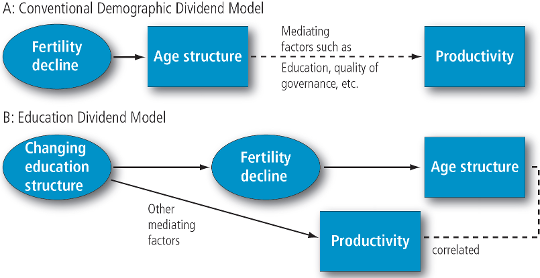 In another POP study by Andreas Schaefer and Alexia Prskawetz investments in human capital are put in the context of the linkages between economic inequality in terms of wealth, life expectancy, health care and pollution. While decisions of the households on investing in human capital are formed by the wealth distribution, they are also affected by the life expectancy that defines the time horizon for human capital investment’s return. In turn, the life expectancy is positively affected by public health investments and negatively by the pollution stock stemming from aggregate production. The study’s model proves that when choosing between increase in taxes and increase in the public health expenditure share the latter option is preferable, as it does not affect the long-run levels of households’ wealth and increases the tax base through increased productivity influenced by higher life expectancy and higher investments in human capital.

Generating a sound scientific foundation for understanding societies’ demographic and economic developments and projecting likely changes in the future is the key goal of the “4D” population projections for Austria that cross-classify populations by age, sex, education and labour force participation. The developed model by Elke Loichinger and Wolfgang Lutz projects educational attainment up to 2050, making use of scenarios showing which education policies can best continue the 30-year trend of increasing educational attainment in Austria and consequently influence productivity and economic growth.