Seeing the ocean for the fish 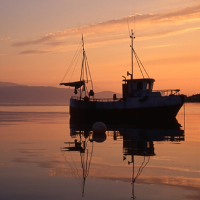 The new study, published in December in the journal Fish and Fisheries, provides a suite of methods to quantify and predict evolutionary changes in fish populations related to fishing practices. These methods, collectively known as an Evolutionary Impact Assessment (EvoIA), will allow fisheries managers to include evolutionary changes and influences in their assessments and determine the best ways to manage fisheries.

“Fisheries managers have recognized for a long time that traditional methods of studying fisheries don’t give the whole picture,” says IIASA Evolution and Ecology Program leader Ulf Dieckmann. Not only do species interact with each other and the environment, he says, but fishing itself can shape evolution in ways that affect a population’s health and resilience.

It is well known that humans can put pressure on plants and animals that causes them to adapt in response. And just as centuries of human influence transformed wild wolves into docile pet dogs, plants and animals also respond to more indirect pressures from their human neighbors.

A growing body of research has shown a clear link between fishing and evolutionary changes. Dieckmann explains that commercial fishing methods that select for the biggest, juiciest fish take those animals out of the population, so that the remaining fish tend to be smaller and mature faster.

For example, previous IIASA research has shown that North Atlantic cod, one of the world’s most common fished species, now reach maturity 3 to 4 years earlier than in the 1970s. That means that the mature fish are now smaller and produce fewer eggs – potentially weakening the population.

Such changes were also identified in the northern cod population near Newfoundland, a stock that collapsed in 1992. Says Dieckmann, “That was one of the worst disasters of modern fishery management. The fish are basically gone.” While a causal link between adaptation and the northern cod collapse was not clear, Dieckmann suggests that a better understanding of the ecosystem and evolutionary pressures might have helped fisheries managers avoid such a catastrophe.

Managing fish for the future

Today, many fishery managers try to look at fish populations from a holistic ecosystem perspective. But while this idea is accepted in theory, in practice managers still have few tools at their disposal, particularly when it comes to understanding the role of adaptation in populations. The study authors hope that EvoIA will help fill that gap with a suite of tools from which managers can pick and choose.

“Our goal was flexibility,” Dieckmann says. “This tool allows people to evaluate management strategies and find one that is optimal.”

With EvoIA, fisheries researchers and managers can feed readily available data, such as fish number, size, sex, age, and maturity, into models that answer key questions:  How does fishing affect the animals? How does it affect population dynamics of the stock? How does that affect the utility of the stock to society?

The models that make up the EvoIA toolbox come from in-depth research by an international network of fisheries experts. For example, in another recent study, Dieckmann and colleagues Shuichi Matsumura and Robert Arlinghaus critically assessed two methods for evaluating selection strengths, which measure the relative impact of a human pressure on a population –key indicators that feed into an EvoIA. The study, published in the journal BioScience, shows how to standardize selection pressures so that they can be compared across traits, stocks, and species.

For more details on EvoIA, read the article: Assessing the Impacts of Fisheries-Induced Evolution.