Tip Sheet for Journalists: May 2014 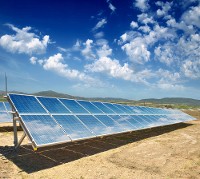 While solar power in North Africa could provide a valuable source of renewable energy for both Africa and Europe, investors have been cautious about funding large projects in the region, particularly following recent uprisings such as the Arab spring. A new study from IIASA researcher Nadejda Komendantova shows that the largest risks for solar power projects in North Africa lie primarily in governance risks—that is the chance that political change could rapidly change business conditions in the countries. The researchers conducted their study using interviews and surveys from 2011 to 2013, following how perceptions of risks changed with political developments in Egypt and northern Africa.

To improve the chance for renewable energy deployment, the researchers say, policymakers should focus on supporting good governance and institutional structures in the region.

IIASA’s crowdsourcing game Cropland Capture ended its six-month campaign on 9 May 2014. Players have already validated more than 4.5 million square kilometers of land cover. Researchers are now using the data to build a new and improved map of global cropland. The game will also continue with improvements, and the team is working to design new games in related research areas.

While the game players during the trial period will now have a chance to win prizes such as an Amazon Kindle, a smartphone, and a tablet, the biggest winner is global land cover research, a vital area of study for informing global food security, identifying yield gaps, and monitoring crops affected by droughts. Current maps of farmland around the world are far from ideal: they rely heavily on coarse-resolution satellite data, which makes it difficult to distinguish cropland from non-cropland.

A better forest model for Bolivia

A new study from researchers at IIASA and Wageningen University in the Netherlands provides a far better understanding of the carbon dynamics in tropical forests. The study, published in the Journal of Geophysical Research: Biogeosciences provides a comprehensive climate impact assessment for the forests of Bolivia, for the first time providing an accurate assessment of forest carbon cycling in the country’s diverse forests, which include both evergreen and deciduous ecosystems.

Christian Seiler, the Wageningen University researcher who led the study, recently completed his PhD under the advisement of IIASA Director General and CEO Prof. Dr. Pavel Kabat. He says, “Our study serves as a baseline for assessing the potential impacts of climate change for tropical forests in Bolivia.”