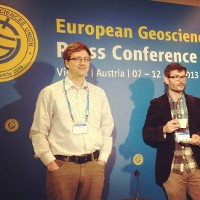 PRESS CONFERENCE: Droughts and floods in a warming climate
Many regions of the world – including the Mediterranean and the western United States, may see unprecedented levels of drought before 2050—drawing increasing urgency to calls for adaptation and updated water management policy. Drought severity and frequency is expected to increase beyond historical levels because of climate change. In the new study, IIASA researcher Yusuke Satoh showed by 2050, 13 of 26 world regions could see unprecedented levels of hydrological drought. Read more>>

Satoh will take part in a press conference on Wednesday, and will present his work in a scientific session on Friday 17 April.

Community-based flood resilience
How well a community recovers from flooding in large part depends on how prepared they are—a term known as resilience. But while resilience is increasingly recognized as important, there is so far no agreement on how to measure it. IIASA researcher Adriana Keating will present key lessons on flood resilience from the Zurich Flood Resilience Alliance, a unique partnership between business, research, and non-profit organizations.

A new paradigm for land use policy planning
Predicting future changes in land use is vitally important for understanding climate change, deforestation, and other environmental change—and for designing intelligent policies related to these topics. But understanding and projecting how human beings will affect their environments is full of uncertainty. IIASA researcher Žiga Malek describes a new participatory process for scenario-building, in which researchers work closely with regional stakeholders to build a model that better represents reality.

Negotiating climate policy – resigning to resilience
IIASA Energy Program Director Keywan Riahi will take part in a debate about the outlook for a global climate change agreement in 2015:  Nations are striving to negotiate a new global climate change agreement in late 2015 in Paris. These negotiations offer governments a crucial occasion to reach a broad, balanced and durable agreement strengthening the international climate effort. The Great Debate will discuss two possible avenues that humanity can choose: pursue negotiations and achieve a solution that combats global warming, or to put more effort on adaptation and resilience building. The panel will discuss emission scenarios and related climate consequence.

Climate change in the rainforest
Not only are rainforests an important sink for atmospheric carbon, they are also influenced by changes in climate, including temperature and precipitation changes. A new study of the Congo basin rainforest, by IIASA researcher Stephan Pietsch, provides an estimate of the climate change thresholds that these forests can handle. The study uses a new model to compare disturbed and undisturbed forests under different climate conditions.

Russian forests and the Earth system
Approximately half of Russia’s vast land area is covered in forests, making the region an important sink for atmospheric carbon. Quantifying changes to the amount, state, and productivity of forestland in Russia is incredibly important for understanding the Earth’s carbon and nitrogen cycles at a global scale. In a new study, IIASA researcher Anatoly Shvidenko and his team calculated the net carbon uptake of Russian forests from 1960 to 2010. The study shows that Russian forests have taken up a range of 350-700 Tg of carbon per year over the past 50 years, with 10-15% variability from year to year. However, decreasing governance of forests and the impact of climate change in the Russian territory has caused a decrease of forest area at about 28 million hectares from 2000-2010 and a negative trend in carbon sequestration.

More information about IIASA presentations and participation in the EGU 2015 General Assembly.