On 9 April, Lutz participated in the Vienna launch of the  United Nations Human Development Report 2013.IIASA population and education projections underlie much of the report, which shows development gains in the Southern Hemisphere during the last several years.

In this interview with Radio FM4, Lutz describes IIASA research that shows how important women's education is in human development. 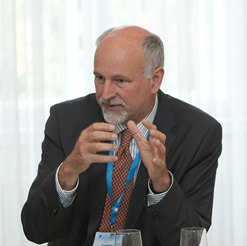 Wolfgang Lutz is leader of IIASA's World Population Program and Founding Director of the Wittgenstein Centre for Demography and Global Human Capital, a collaboration between IIASA, the Austrian Academy of Sciences and the WU-Vienna University of Economics and Business.Since 2002 he is also director of the Vienna Institute of Demography (VID) of the Austrian Academy of Sciences and since 2008 Full Professor of Applied Statistics (part time) at the WU. He is also Professorial Research Fellow at the Oxford Martin School for 21st Century Studies.