40 years of YSSP: A life-changing experience for young scientists

Options Magazine Summer 2017: This summer the IIASA Young Scientists Summer Program celebrated 40 years. Although much has changed since its first year in 1977, the basic idea that launched the program has ensured its success: bringing together an international, interdisciplinary group of young scientists to work together at IIASA. 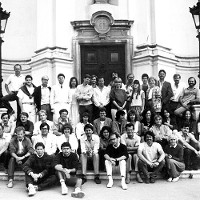 At many academic institutions in Europe, summer is sleepy. Offices are empty, doors are closed, and emails bounce back with vacation messages. At IIASA, it’s the opposite. Each June to August brings an injection of life into the castle, as over 50 young scientists join the institute for the annual Young Scientists Summer Program (YSSP). The young scientists, usually PhD students, come from around the world and many different disciplines to work with IIASA researchers. The aim is to publish a scientific paper. For many it is the first time doing independent research, working with scientists outside of their discipline, or applying research to policy. The program has been the launching pad to many successful careers in science, policy, and business. And it is the seed of many fruitful collaborations and connections.

“The international and interdisciplinary cohort experience is the most unique and important aspect of the YSSP. Participants leave with a global network of 50+ friends and colleagues for life,” says Brian Fath, the scientific coordinator of the program, who also participated in the program in 1997. 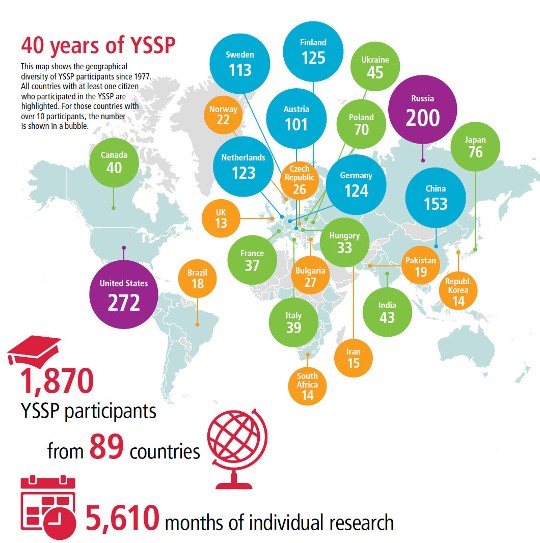 The program was started in 1977 under the leadership of then director Roger Levien. He came up with the idea based on his own experience working as a summer student at the RAND Corporation in 1956.

“That summer experience, at the right point in my career—it transformed my entire career,” says Levien. “When I came to IIASA in 1975, I thought it would be wonderful if we could provide a similar experience at the institute, for young scientists from many nations.”

Back then the groups were smaller, and like science itself in those days, mostly men. They came from the two sides of the Cold War divide—USA, Russia, Canada, Japan, and countries in Eastern and Western Europe. At the time, it was unusual for researchers to work across this divide.

Today’s young scientists come from not just east and west, but around the world—in 2017 there will be 52 students from 28 countries. And the groups are now evenly mixed between men and women. In 2016 for the first time, women outnumbered men in the program.

While the program has expanded and become more diverse, in its essence the idea has not changed since it was first launched 40 years ago. “We’ve made some adjustments over the years, but the fact is that the original formula works really well: People come here to do research,” says IIASA Risk and Resilience Program Director JoAnne Linnerooth-Bayer, who has served as dean of the program since 1990. 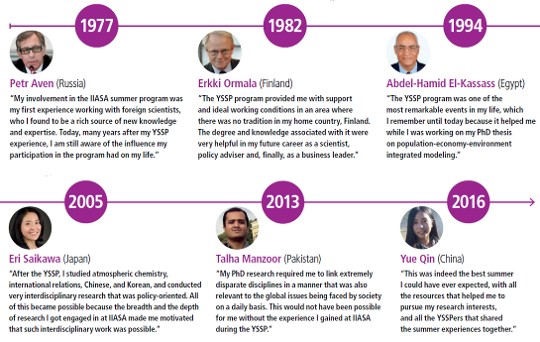 Options 2002: A New Generation of Scientists