The balancing act of sustainability

Options Magazine Summer 2017: What happens when work towards one sustainability goal prevents progress in another? Do we have to choose between universal energy access and climate change mitigation, or biodiversity and food security? 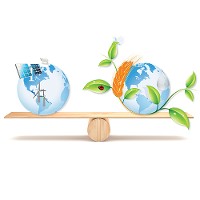 Imagine pumping air into a party balloon. As it fills, you can press your fingers against any weak spots to alleviate the strain. The balloon swells and you savethe weak spots from catastrophic failure–but of course, you have simply shifted the pressure somewhere else.

“All of our various demands on the land system, from mining to agriculture and forestry, are like pumping air into that balloon,” says IIASA researcher Brian Walsh.“Conservation,” he adds, “is like putting your finger over the weak spot–it can put pressure on the system elsewhere.”

IIASA has been working on these tradeoffs for some time, constructing models to see how our interconnected planet copes with various challenges (see box). One such model, the Global Biosphere Management Model (GLOBIOM) examines the tension between safeguarding the environment and producing vastly more food than we do now.

Walsh and his colleagues are searching for the interventions that minimize the trade-offs and,hopefully, create synergies too. Surprisingly, one intervention has emerged that is “an orderof magnitude more positive than any other intervention in conservation,” says Walsh. Thismeasure led to a reduction in deforestation, irrigation, fertilizer use, and biodiversity loss—as well as greenhouse gas emissions.

This intervention was giving up meat. Meat consumption is predicted to rise by 50% by 2050. In a recent study, the researchers held consumption constant instead–reflecting a reduction in meat consumption in the developed world and an increase in poorer countries to satisfy nutritional goals.

“All of this land that the model thinks will be needed for pasture and animal feed is freed and so there’s less deforestation, less irrigation, less fertilizer use, and less biodiversity loss–and fewer greenhouse gas emissions,” says Walsh.

Put another way, it’s like letting air out of the balloon, and Walsh is now convinced that eating less meat “is the single largest thing that anyone can do to care for the planet”.

Another area that may cause clashes between conservation and development is the quest to bring modern energy to all by 2030–UN Sustainable Development Goal 7–which can seem in opposition to the Paris Agreement to keep global temperature rise at less than 2°C above pre-industrial levels.

IIASA researchers have been modeling these tensions in different regions: In South Asia Shonali Pachauri has been working on the problem as part of the IIASA project Linking Climate and Development Policies–Leveraging International Networks and Knowledge Sharing; and Peter Rafaj has been examining similar issues in South Africa.

In South Asia many of the poor burn biomass, such as dung or wood, and in South Africa, a lot of slum households burn coal. Both of these produce noxious indoor pollution. Switching to stoves that use bottled gas, or tapping into the electricity grid, are solutions. But policies to cut carbon and pollutant emissions are likely to increase the price of these.

In South Africa a host of measures aimed at tackling climate change and air pollution–such as investments in renewable energy, retrofitting coal power plants to scrub out pollutants, and putting a higher price on carbon–are all pushing up the price of electricity. Many people who have been hooked up to the electricity supply nevertheless find it’s cheaper to use coal.

In South Asia, Pachauri has quantified the tensions using an extension of the Model for Energy Supply Strategy Alternatives and their General Environmental Impact called MESSAGE-Access. If things go on as they are, she says, there will likely be 700 million South Asians without access to clean cooking fuels even in 2030.

The cost of bringing modern energy to these 700 million people would be US$29 billion, but that’s without the effect of carbon reduction policies, which could push that cost up by 44%–or mean that another 430 million people (20% of South Asia’s population) were abandoned to dirty fuels.

“We’re not saying don’t do climate policy, but we have to be very careful in designing those policies,” says Pachauri.

For both South Asia and South Africa, the researchers found that the poor must be shielded against fuel price rises to help them move to modern energy.

In South Africa, Rafaj and other authors, including Harold Annegarn of the Energy Institute in Cape Town, South Africa, used the Greenhouse Gas and Air Pollution Interaction Synergies (GAINS) model which has informed policy in Europe and South Asia.

They found that the money intended for retrofitting coal stations to remove air pollutants would be more effectively spent eliminating air pollution on the ground—by upgrading stoves, subsidizing electricity use, insulating homes, and suppressing dust.

“You’re talking about a very large expenditure on very old plants for marginal benefit versus a direct and significant reduction in domestic exposure,” says Annegarn.

One consequence of the energy policy debate in South Africa was that the government has allowed coal stations to postpone their retrofits, provided they fund on-the-ground interventions. If fully implemented, the GAINS analysis might become a centerpiece for the future local decision making.

New policies in India too are more aligned with results from the MESSAGE-Access analysis. A new Indian scheme provides free stoves and gas cylinders to women from poor households in addition to subsidizing the fuel (for everyone). “Our analysis shows that for poor householdsthe upfront cost of the stove and cylinder is a bigger hurdle than the fuel costs,” says Pachauri.

Meanwhile, Pachauri is also expanding analysis to consider how the energy access Sustainable Development Goal interacts with others. The good news is that it seems to support them more than it undermines them. Another way of letting air out of the balloon?

Synergies and trade-offs in the Sustainable Development Goals