Mitigating the effects of drought in Austria 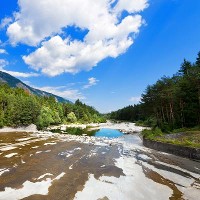 Droughts pose a significant challenge to farmers and governments worldwide. Apart from immediate effects like crop losses, droughts could cause a domino effect that can wreak havoc on businesses and the environment. The effects of climate change will likely cause droughts to occur more frequently and with greater severity, which means that businesses like insurance companies will have to absorb greater losses. Although it may not be possible to prevent these effects, it is possible to prepare for them.

A recent study demonstrated that a large-scale drought risk assessment could help quantify the effects of current and future droughts. While previous assessments focused on average changes, this study was able to capture changes in a probabilistic way. This more accurate information makes it possible to properly prepare for droughts and to mitigate some of the negative effects of climate change.

“While our analysis shows that an increase in extreme risk of drought losses due to climate change can be expected in Austria, it also provides a possible way forward to deal with them,” explains Stefan Hochrainer-Stigler, a researcher with the IIASA Risk and Resilience Program. “By adapting risk financing instruments, like subsidized insurance, that are already in place, we can mitigate some of the significant costs associated with drought.”