Options Summer 2019: Biomass co-firing could be a cheaper way to reduce CO2 emissions that result from coal burning in Vietnam. 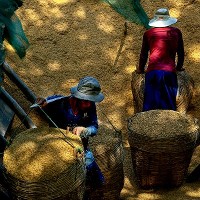 In recent years, Vietnam has turned away from cleaner energy sources in favor of coal, which, while being cheaper to produce, is far more harmful to the environment. In fact, the nation’s government just approved a slew of new coal power plant projects, which are expected to quadruple the country’s greenhouse gas emissions by 2030.

To combat these increased emissions, scientists are looking to biomass co-firing, which is a mature technology in Vietnam and involves adding clean-burning biomass as a fuel source to the coal-burning process. The cost of doing so is low with minimal infrastructure investment, and it could significantly reduce carbon emissions.

Researchers assessed the costs and potential impact of using domestic rice as biomass. They found that a carbon tax of US$30 per ton of carbon dioxide would help achieve a 5% emission reduction by 2030, while biomass co-firing will contribute to an 8% reduction with an abatement cost of $137 million.

"Achieving the national emission targets will require a portfolio of low-carbon technologies,” explains Piera Patrizio, a researcher in the IIASA Ecosystem Services and Management Program. “The deployment of co-firing might represent the first steps in this direction and pave the way for deeper carbon mitigation options, like bioenergy with carbon capture and storage.”