Options Magazine Winter 2016: Planning for the future to ensure no one goes hungry. 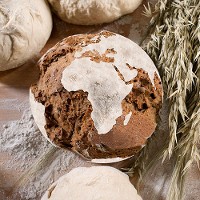 Our food supply is under threat worldwide. To tackle this we need a good understanding of future climate change, as well as its interactions with our food resources. Using systems science we need to understand how our actions, from wars to trade agreements, can affect food security, and how we can adapt to a changing world.

What is secure in a changing world?

Food security does not mean simply having enough to eat now and enough seed put aside for next year’s crop. In today’s world we must also prepare for the global, long-term changes to come.

Predicting the effects of climate change on our food sources requires large-scale data on which crops are grown where, how vulnerable they are to climate change, and what management practices or technologies are in place. To tailor this information to policymakers’ needs, IIASA has helped to create a new interactive website MapSPAM, which maps 42 of the world’s key crops at ten-kilometer resolution.

Soil type also has a vital part to play, recent IIASA work has shown. “Different soils can have very difference characteristics, in terms of levels of nutrients or water-retention capacity, for example,” says IIASA researcher Christian Folberth. “Some soils act like a sponge, for instance, providing water to plants throughout a drought.”

In fact, in regions that use only small amounts of fertilizer or irrigation—often the poorer areas—crop yields might be even more closely linked to the cultivated soil type than weather. This finding has important consequences for improving food security, says Folberth. “By using accurate soil data in our models we can provide farmers with better advice on how to select the right crops for their soils and how to manage their soils to prevent them from becoming degraded.”

Diversity to cope with change

Just as our soils may gradually lose their ability to provide for us, another slowly emerging threat is our influence on the very gene pools of the organisms we rely on for food. So-called heritage crops, from purple carrots to ancient strains of wheat are suddenly popular, in part because there is a real concern that the genetic diversity of our food is declining to dangerous levels. If only a single strain remains disease might decimate any crop, and indeed we have already lost an important strain of bananas.

Just as breeding for certain characteristics can alter the gene pool, so can harvesting certain types of individuals from a population. In the context of aquatic food resources, IIASA research has shown that by always removing the larger fish, intense fishing can alter the gene pool of fish populations—so-called fisheries-induced evolution—putting stocks at risk of collapse, as well as reducing their productivity and recovery potential. To help prevent this, IIASA researchers have developed the Evolutionary Impact Assessment Framework, which enables managers to estimate the vulnerability of different fish populations and to identify strategies to create thriving, sustainable fisheries.

When food is scarce, tensions are high. Unrest and war might both cause food shortages and be caused by them. By combining information on socioeconomic risk factors (such as political conflicts) with satellite data on physical conditions (such as soil moisture and weather) IIASA has helped develop a mobile-phone app—SATIDA COLLECT—which identifies communities vulnerable to food scarcity. It is currently being trialed by Médecins sans Frontières in the Central African Republic.

“One of the biggest challenges to helping communities facing food shortages is not having information on their vulnerability, and not having it in time,” says IIASA researcher Linda See. The SATIDA COLLECT app is designed for aid charity staff to record the answers of local people to a series of simple questions linked to food security, including: ‘Have any family members left the region recently?’ ‘Has anybody died?’ ‘How often do you eat?’

As soon as the smartphone has internet signal this information can be uploaded, combined with satellite data on physical conditions, and used to produce vital maps of hotspots for malnutrition risk.

“Food security can be monitored on a weekly basis,” says See. “Also, if we know that there is an event coming that might threaten food security, like El Niño, the NGOs can use this data to improve the resilience of the areas most at risk.”

Not only does food security have a wealth of links from physical to socioeconomic systems, it is also closely connected to other essential resources. Intensifying agriculture can pollute and deplete the water supply, for instance. These interdependencies extend to energy and forestry, and to international trade. Using systems analysis to account for these connections, IIASA researchers, in partnership with the National Academy of Sciences of Ukraine, are working to provide policy advice to Ukraine, a country that has suffered low yields in the past and as a result has had to impose export quotas to ensure domestic food security and mitigate the impact on food prices. “We linked national models with a global multi-region model, the IIASA Global Biosphere Management Model, which can account for interdependencies among different countries and economic sectors,” says IIASA researcher Tatiana Ermolieva. “We found that as the climate warms, Ukraine may benefit from growing crops that will suffer elsewhere, such as some cereals in France, Germany, Italy, and Spain, where yields are predicted to fall. In this way, it is possible to analyze how EU policies impact Ukraine and vice versa, as well as how both can work together to strengthen regional and global food security.”