Impact Sheet #15, February 2017. IIASA provided Brazil with a clear, quantitative basis to its climate commitments, leading to robust policy that the government could be sure of delivering. 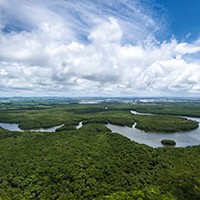 Brazil’s rainforests provide globally important carbon storage, as well as harboring a substantial proportion of the world’s biodiversity. However, high rates of deforestation have had severe impacts on these important resources, and as the country’s agricultural sector continues to expand there is an important balance that must be struck.

In the run up to the Paris climate summit, Brazilian policymakers had an important but complex task: to produce ambitious but feasible climate policies that also allowed the economy to flourish. IIASA was uniquely placed to help with this problem: as an independent, politically neutral research institute it is also a world leader in systems analysis, the only tool that can provide robust policy guidance on such issues. To aid Brazil, IIASA researchers employed the institute’s Global Biosphere Management Model as part of REDD-PAC—an assessment center for policies aimed at reducing emissions from deforestation and forest degradation.

Dr. José Domingos Miguez, director of Brazil's Department of Environmental Evaluation in the country's Ministry of the Environment, and one of Brazil’s leading climate negotiators, said: "Land-use emissions are a central part of Brazil’s climate commitments. Having clear, quantitative evidence as the basis of Brazil’s INDC also strengthens our negotiating position on the international stage. Being able to point to the scientific basis for our climate commitment helps build trust with other nations, and create a transparent environment for climate negotiations in the future. The Brazilian Government has benefited from the cooperation between IIASA and leading Brazilian public institutions, the National Institute for Space Research and the Institute for Applied Economic Research. The results of the GLOBIOM-Brazil model were quite informative and have provided science-based evidence that has contributed to Brazil’s INDC."

Supporting national climate policy in Brazil and beyond (PDF)