An IIASA delegation led by Director General and CEO Professor Dr. Pavel Kabat visited Moscow to participate in the Gaidar Forum - the major annual international scientific conference in the field of economy in Russia. At the forum, Kabat strengthened cooperation between Russia and IIASA through meetings with leading experts in government and academia, including Prime Minister of the Russian Federation Dmitry Medvedev. While IIASA's demographers presented their latest research findings about Russia. 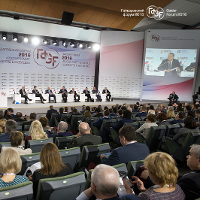 Russia is a founding member of IIASA with forty-five years of continuous intensive cooperation resulting in a range academic and science to policy achievements (see box below for examples of recent collaborations).

The Gaidar Forum has been the central political and economic annual international scientific conference in Russia since 2010. Organized by the Russian Presidential Academy of National Economy and Public Administration (RANEPA), the Gaidar Institute for Economic Policy, and the Association of Innovative Regions of Russia (AIRR). The emphasis of this year's Forum lied on the most acute current global challenges with a focus on Russia’s place and strategic role in the world. The Gaidar Forum provided a meeting point for theorists and practitioners, leading scientists and politicians, and representatives from the financial sector. Professor Yegor Gaidar, former Russian Prime Minister, considered by many to be the intellectual leader of Russia's economic reform in the early 1990s, made extended visits to IIASA when the institute was analyzing the issues of economic reform in the Soviet Union.

The Russian Demographic Datasheet 2016, a collaboration between POP at IIASA, RANEPA and the Russian Federal State Statistics Service (Rosstat) will be launched at the Gaidar Forum 2017. For the first time, key demographic indicators and main population trends for all subjects of the Russian Federation, including population projection for 2035 are comprehensively presented in one data sheet. Special attention is given to the importance of alternative indicators of population aging for the current and future population changes across Russia. 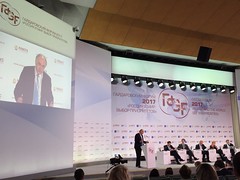 During Russia's forty-five year membership of IIASA, the Institute has helped it to:

With this in mind, during his visit to Moscow Kabat aims to further enhance collaborative activities between Russia and IIASA through holding a wide range of high-level meetings with a number of leading experts in the government, academia and business, including:

Knowledge transfer between IIASA and Russia is also facilitated through multiple exchanges with Russian scientists who spend periods working in IIASA’s international and interdisciplinary research environment. The scientific output from these numerous formal and informal activities is highly productive, with almost 800 joint publications since 2008.