Faster increases in life expectancy reflect a process in which people become healthier, generally more capable, and indeed younger in many ways even if they have lived longer lives, according to population experts at the International Institute for Applied Systems Analysis (IIASA). 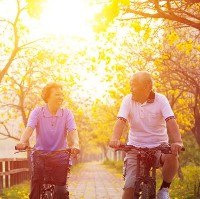 Traditional measures of age classify people as old, even if they have characteristics of much younger people. © Tom Wang | Dreamstime.com

Faster increases in life expectancy do not necessarily produce faster population aging, according to new research published in the journal PLOS ONE. This counterintuitive finding was the result of applying new measures of aging developed at IIASA to future population projections for Europe up to the year 2050.

“Age can be measured as the time already lived or it can be adjusted taking into account the time left to live.  If you don’t consider people old just because they reached age 65 but instead take into account how long they have left to live, then the faster the increase in life expectancy, the less aging is actually going on.” says IIASA World Population Program Deputy Director, Sergei Scherbov, who led the study in collaboration with IIASA and Stony Brook University researcher Warren Sanderson.

Traditional measures of age simply categorize people as “old” at a specific age, often 65. But previous research by Scherbov, Sanderson, and colleagues has shown that the traditional definition puts many people in the category of “old” who have characteristics of much younger people.

“What we think of as old has changed over time, and it will need to continue changing in the future as people live longer, healthier lives,” says Scherbov. “Someone who is 60 years old today, I would argue is middle aged. 200 years ago, a 60-year-old would be a very old person.”

Sanderson explains, “The onset of old age is important because it is often used as an indicator of increased disability and dependence, and decreased labor force participation.  Adjusting what we consider to be the onset of old age when we study different countries and time periods is crucial both for the scientific understanding of population aging for the formulation of policies consistent with our current demographic situation.”

In the new study the researchers compared the proportion of the population that was categorized as “old” using the conventional measure that assumes that people become “old” at age 65 and the proportion based on their new measure of age, which incorporates changes in life expectancy.

The study looked at three scenarios for future population aging in Europe, using three different rates of increase for life expectancy, from no increase to an increase of about 1.4 years per decade, the level projected by the Wittgenstein Center’s* European Demographic Datasheet.  The results show that, as expected, faster increase in life expectancy lead to faster population aging when people are categorized as “old” at age 65 regardless of time or place, but, surprisingly, that they lead to slower population aging when the new measures of age are used.

The study was funded by a grant from the European Research Council.

*The Wittgenstein Center is a collaboration among the World Population Program of the International Institute for Applied Systems Analysis (IIASA), the Vienna Institute of Demography of the Austrian Academy of Sciences (VID/ÖAW), the Demography Group and the Research Institute on Human Capital and Development of the Vienna University of Economics and Business (WU)

How much of europe will be "OLD" in 2050? | Create infographics
Print this page

The ERC Grant to Sergei Scherbov supports his work to explore population aging and its impacts on Europe and beyond.