IIASA welcomes the election of Hoesung Lee, of the Republic of Korea, as the new chair of the Intergovernmental Panel on Climate Change (IPCC). 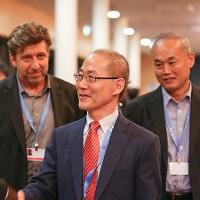 The IPCC elected Lee on 6 October during its 42nd Session in Dubrovnik, Croatia. Six candidates for the IPCC chair were nominated by the member countries of the IPCC, three from countries with membership in IIASA (USA, Korea, and Austria ). Lee hails from the Republic of Korea, one of IIASA’s member countries.

“I am honored and grateful that the Panel has elected me as the IPCC’s new Chair,” said Hoesung Lee, in a statement released yesterday. “The IPCC remains deeply committed to providing policymakers with the highest quality scientific assessment of climate change, but we can do more.”

“We welcome Lee’s election as IPCC chair and look forward to continued collaboration with the panel,” says IIASA Director General and CEO Professor Dr. Pavel Kabat. “As a scientific institute focused on policy-relevant research, IIASA has worked closely with the IPCC since the beginning and we envision a future of fruitful exchange.”

IIASA Deputy Director General Nebojsa Nakicenovic was also nominated for the position by both the governments of Austria and of Montenegro. Nakicenovic is one of the world's most renowned scientists in the field of climate change and has demonstrated strong leadership in a wide range of international scientific assessments. Following the vote, he congratulated Hoesung Lee personally on his election to the chair of the IPCC.

“I wish Hoesung Lee a lot of success in leading IPCC towards bringing the science to policy—this will be needed more than ever in the coming years, after the adoption of SDGs in NY and after COP21 in Paris,” said Nakicenovic. “IIASA would be privileged to contribute the best science on climate change mitigation, adaptation, and vulnerabilities to the future work of the IPCC.” 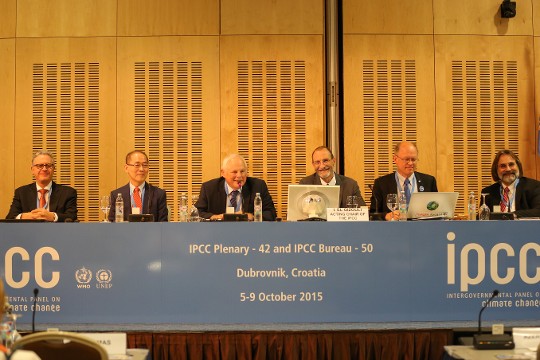 In the 1970s, IIASA systems analysts were some of the first to study climate change in an interdisciplinary way, with one of the first international and interdisciplinary assessments of what was then called the carbon dioxide problem.   During this time, IIASA researchers also developed the first economic model of global warming and identified carbon capture and storage as a possible solution.

Move forward to 1985 and IIASA systems scientists are again playing a key role. This time at an international conference in Villach, Austria, where they warned the world about the risks of climate change. The Villach conference, according to the New Scientist, was key to recasting climate change as a problem for today and leading to the establishment of the IPCC in 1988.

Since the founding of the IPCC, IIASA researchers have made numerous substantial contributions to the intergovernmental panel. These include Nebojsa Nakicenovic’s leadership of a major report on greenhouse gas emission scenarios for the IPCC in 2000, which involved the development of emissions scenarios that are still widely used to project how emissions will affect future climate. Nakicenovic directed the Global Energy Assessment (2012), which was the first ever fully  integrated  assessment  analyzing  energy challenges,  opportunities,  and  strategies  for  developing,  industrialized and emerging economies and provided the scientific basis for the United Nations Sustainable Energy for All (SE4ALL) initiative. IIASA researchers have made 90 contributions to the IPCC’s five assessment reports as authors and reviewers. And most recently, they have co-developed and hosted several key databases, which among other things are helping to coordinate the work for the climate research community.

In addition, IIASA researchers have applied the IPCC approach to a national level assessment of climate change. Most notably, by Nebojsa Nakicenovic, as Project Leader of the Austrian Panel on Climate Change Assessment Report (APCC-ARR14) which  represents the  first  comprehensive  analysis  of  climate  change  in  Austria,  including  climate impacts, vulnerability, and mitigation options.