A new popular book summarizes scientific research conducted at IIASA and elsewhere showing that education is a key prerequisite  for modern social and economic development. It makes the case for a global alliance on education as a strategy for future wellbeing on the planet. 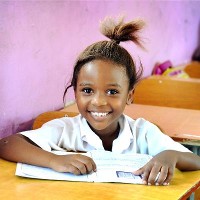 A child at school in Tanzania. © Emil Kudahl Christensen | Dreamstime.com

Expanded education has been a major source of economic and social growth in the past, and will be vital for the future of humanity, argue IIASA World Population Program Director Wolfgang Lutz and Reiner Klingholz of the Berlin Institute for Population and Development, in a new popular book released today: Who survives? Education decides the future of humanity. An English version is planned for release later this year. The book will be introduced at an event on 9 March in Vienna.

“500 years ago the reformation brought literacy – previously a privilege of the elites – to broad segments of population, including women and farmers. This led to unprecedented success in social and economic development and substantially increased wellbeing in the societies that embraced universal education,” explains Lutz, who is also the founding director of the Wittgenstein Center (IIASA/WU/VID).  “This recognition that broadly based education is a root cause of development needs to be translated into international development policies. Universal primary and secondary education of all girls and boys is one of the Sustainable Development Goals, but currently less than 4% of all development assistance is spent on basic education.”.”

The book examines historical case studies as well as global data sets, including population projections developed at IIASA that include not only the number of people but also education levels. They show that more educated women have fewer children and hence education is a key to slowing world population growth.  Throughout the book, the researchers show that people’s knowledge and capabilities tend to be more important than income when it comes to health, resilience and wellbeing. Lutz says, “What is in people’s heads is more important than what is in their wallets.  Education forms and enhances people’s cognitive and abstraction skills, which not only helps to fill their wallets but also improves people’s health, improves society and the quality of institutions, reduces population growth through lower birth rates and strengthens resilience at all levels - and even makes people happier.”

Read more in an interview with the authors on the IIASA Nexus Blog.