A new study finds that the world can emit even less greenhouse gases than previously estimated in order to limit climate change to less than 2°C. 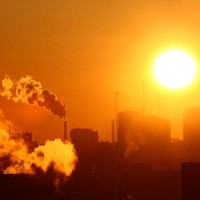 In a comprehensive new study published in the journal Nature Climate Change, researchers propose a limit to future greenhouse gas emissions—or carbon budget—of 590-1240 billion tons of carbon dioxide from 2015 onwards, as the most appropriate estimate for keeping warming to below 2°C, a temperature target which aims to avoid the most dangerous impacts of climate change.

The study finds that the available budget is on the low end of the spectrum compared to previous estimates—which ranged from 590 to 2390 billion tons of carbon dioxide for the same time period—lending further urgency to the need to address climate change.

“In order to have a reasonable chance of keeping global warming below 2°C, we can only emit a certain amount of carbon dioxide, ever. That’s our carbon budget,” says IIASA researcher Joeri Rogelj, who led the study. “This has been known for about a decade and the physics behind this concept are well-understood, but many different factors can lead to carbon budgets that are either slightly smaller or slightly larger. We wanted to understand these differences, and provide clarity on the issue for policymakers and the public.”

“This study shows that in some cases we have been overestimating the available budget by 50 to more than 200%. At the high end, this is a difference of more than 1000 billion tons of carbon dioxide,” says Rogelj.

Estimates for a carbon budget consistent with the 2°C target have varied widely. The new study provides a comprehensive analysis of these differences. The researchers identified that the variation in carbon budgets stemmed from differences in scenarios and methods, and the inclusion of other human activities that can affect the climate, for example the release of other greenhouse gases like methane. Previous research suggested that the varying contribution of other human activities would be the main reason for carbon budget variations, but surprisingly, the study now finds that methodological differences contribute at least as much.

The proposed budget accounts for warming of all human activities and greenhouse gases and is based on detailed scenarios that simulate low-carbon futures.

Rogelj says, “We now better understand the carbon budget for keeping global warming below 2 degrees. This carbon budget is very important to know because it defines how much carbon dioxide we are allowed to release into the atmosphere, ever. We have figured out that this budget is at the low end of what studies indicated before, and if we don’t start reducing our emissions immediately, we will blow it in a few decades.”

The 2°C target—limiting future average temperature rise well below 2°C over pre-industrial averages—was adopted as a goal by 196 countries at the 2015 climate conference in Paris as a safe limit to prevent dangerous impacts of climate change. Yet, this target is political rather than scientific, and risk are perceived differently in different countries. Therefore, countries also decided in Paris to pursue efforts to further limit warming below 1.5°C.

The next step—translating temperature targets into clear emissions guidelines is also a complicated task, and researchers have been working to develop new methods to provide clarity to policymakers, as well as link this research to the Sustainable Development Goals, adopted in Fall 2015. For more information see the CD-LINKS project.