Emission reduction pledges made by individual countries under the Paris Agreement leave a wide range of possible climate outcomes, according to new research. Without stronger pledges, the study shows, the climate goals may not be possible to achieve. 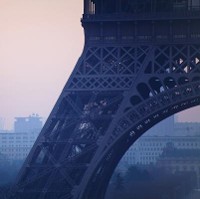 Under the pledges made by countries under the Paris Agreement on climate change, greenhouse gas emissions could range from 47 to 63 billion metric tons of CO2 equivalent (GtCO2e) per year in 2030, compared to about 52 GtCO2e in 2015, according to a new analysis. That range has critical consequences for the feasibility of achieving the goal of keeping warming “well below 2°C” over preindustrial levels, according to the study published in the journal Nature Communications.

The pledges, known as National Determined Contributions (NDCs) lay out a roadmap of how individual countries will reduce their emissions, with the intention of adding up to a global emissions reduction sufficient to achieve the Paris targets. Yet the new study shows that these individual maps leave out key details that would enable policymakers to see if they are headed in the right direction.

“Countries have put forward pledges to limit and reduce their emissions. But in many cases the actions described in these pledges are ambiguous or imprecise,” says IIASA researcher Joeri Rogelj, who led the study. For example, some pledges focus on improving “emissions intensity,” meaning reducing the emissions per dollar of economic output, but assumptions about socioeconomic growth are often implicit or unknown. Other countries focus on absolute emissions reductions, which are simpler to understand, or propose renewable energy targets, which can be expressed in different ways. Questions also remain about how much land-use-related climate mitigation will contribute, such as reducing deforestation or preserving forests.

The study finds that the emissions implied by the current NDCs can vary by -10 to +20% around the median estimate of 52 GtCO2e/yr in 2030. A previous study, also led by IIASA, had found that that the emissions reductions set out in the NDCs would not put the world on track to achieve the Paris targets. 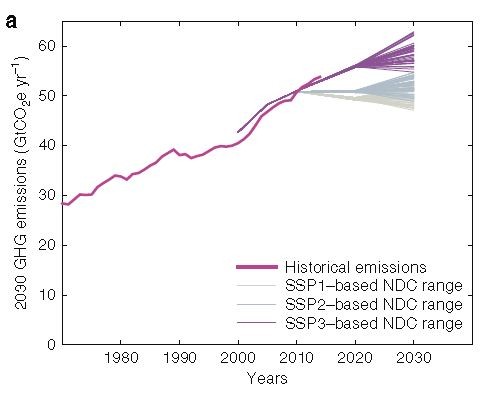 Range of 2030 emissions resulting from various interpretations of the current NDCs: Global historical emissions and projected emissions under the current NDCs. Each line represents one of 144 modeled scenarios. ©Rogelj et al, 2017

The new study confirms this finding. It shows in a quantitative way that in order to keep warming to below 2°C, countries should either increase the stringency of their NDCs by 2030 or consider scaling up their ambition after 2030 by a factor 4 to 25. If the ambition of NDCs is not further increased by 2030, the study finds no pathways for returning warming to 1.5°C by the end of the century.

“The new results allow us to more precisely understand what is driving the uncertainty in emissions estimates implied by the Paris pledges,” says Rogelj. “With this information at hand, policymakers can formulate solutions to remediate this issue.”

“This is the first global study to systematically explore the range of emissions outcomes under the current pledges. Our study allows us to identify the key contributors to the overall uncertainty as well as potential clarifications by countries that would be most promising to reduce the overall uncertainty,” says IIASA Energy Program Director Keywan Riahi, a study coauthor.

The researchers find that uncertainty could be reduced by 10% with simple, technical clarifications, and could be further reduced by clearer guidelines for countries on building their NDCs. The study highlights the importance of a thorough and robust tracking process of progress made by countries towards the achievement of their NDCs and the Paris Agreement goals as a whole.