Policymakers have long been concerned about the effects of an aging population on society, but researchers at IIASA have developed a new tool that shows population aging will likely end by the middle of the century in high-income countries. 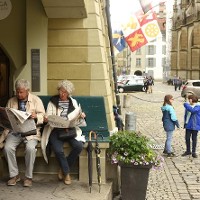 New measures of population aging will give policymakers a better idea of the policies that could help to deal with population aging in the future, according to IIASA researcher Warren Sanderson and IIASA World Population Deputy Program Director Sergei Scherbov, who cowrote the paper with Patrick Gerland of the United Nations Population Division.

In developed countries, birthrates are falling, while better healthcare and quality of life means that people are living longer than ever. An aging population could present serious problems to societies, if the number of those who can work decreases and the number receiving a pension increases.  It is important to know whether population aging in high-income countries will continue throughout the century or not, because different policies would be more appropriate in one case than another.

If population aging was a transitory phenomenon then policies whose focus was to increase labor force participation rates could be given priority.  This could be done by changing taxes, or by eliminating regulations that reduce pension payments for those who are still working. “Policies like these can reduce decreases in the labor force for a few decades, perhaps, but not in the long-run if population aging persists,” says Sanderson.

If the size of the labor force is expected to continue falling over the remainder of the century, for example, then perhaps policymakers may wish to consider migration policies to dampen the fall. Different policies would need to be designed if population aging were to continue for the entire century or not, it is important to ascertain what the situation will be.

The new research is designed to provide the background for policy discussions, rather than offer specific policy recommendations.

One difficult aspect faced by the researchers was to define “old”. This is generally taken to be 65 years old and above, known as the ‘conventional’ age, but they note that a 65-year-old in 2000 is unlikely to be the same as 65-year-old in 2100. Ignoring such changes in population characteristics like this can give rise to misleading results. The researchers instead used ‘prospective’ ages, which take changing life expectancy into account, to give a much better indication. Rather than taking a fixed age as being “old”, the prospective age instead defines “old” as having a remaining life expectancy of 15 years. Thus, as life expectancy of a nation rises, so too does the age at which a person can be classed as “old”.

Sanderson, Scherbov, and Gerland conclude that when the measure of aging used takes into account changing life expectancies, high income countries will not experience continual population aging.  “Policymakers should understand the magnitude of the challenge posed by population aging and the fact that it is temporally limited. This provides them with a much better basis for formulating appropriate policies,” says Sanderson, adding: “Population aging is not a runaway phenomenon.”